Mother Nature has an uncanny way of throwing surprises (and sometimes, shocks) at us. Just when we start to think that we have the Earth and everything about it figured out, something mysterious and peculiar tends to knock us off our senses and baffle us to the core. There are many such places on Earth that warrant an explanation to this day and remain to be some of the most mysterious places you may have ever set foot on.

Check Them Out Here!

We know we should have started this list with the famed Bermuda Triangle which has been the site of disappearance of numerous ships and airlines without any plausible explanation for the same to this day. But a lot has already been written about it.

So we decided to focus on an equally mysterious triangle in the Pacific Ocean, the Devil’s Triangle aka the Devil’s Sea.

Mysterious disappearances have been noted in and around the triangle as well, with many even revealing about sightings of strange objects. Theories from underwater volcanic activity disrupting magnetic confusion in the air to even gateways to Hell made the rounds. However, all research pertaining to the Devil’s Triangle was stopped when a research team from Japan which was hell bent on finding out the answer for these disappearances, disappeared totally.

The sight of the blood red water gushing out of the snow white glacial landscape will leave you enthralled for sure. The Blood Falls is a popular tourist spot in the region and is as mysterious as it gets. However, it was found out that the reddish color of the water staining the Taylor Glacier was due to the presence of microorganisms inhabiting a subterranean lake filled with iron and sulfur deposits. 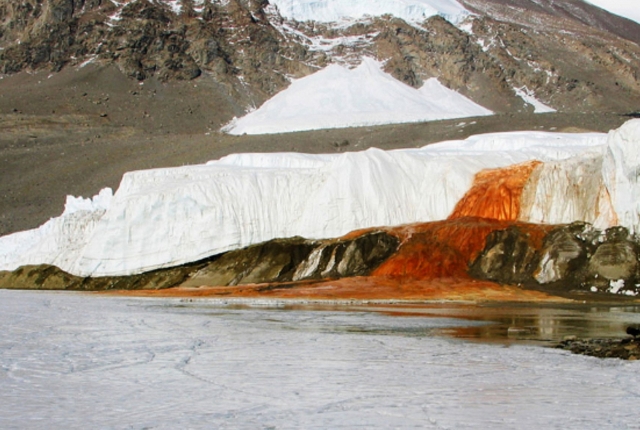 This is what happens when you attempt to fiddle with nature. In 1972, a team of Soviet scientists accidentally managed to create a massive 230 foot wide crater when attempting to drill below the earth for natural gases. Worse yet, they managed to set it on fire; a natural fire that keeps raging inside the crater to this day. Although orders have been issued to close the Door to Hell as it is now called, there is no way the crater can be closed until the natural gas supply in it ends. And that is something that scientists believe will not happen any time soon. 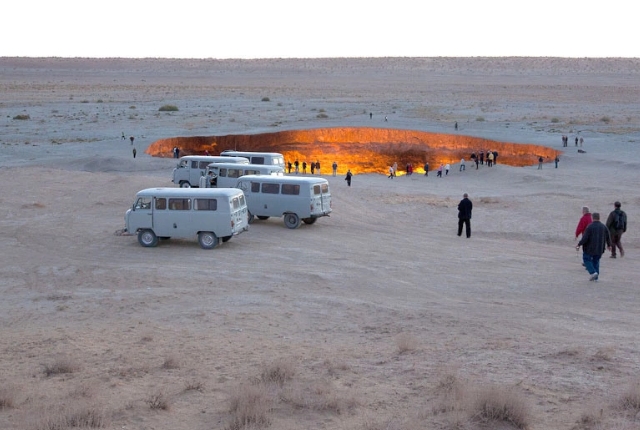 Located in Moncton, the famed Magnetic Hill is one of the most mysterious roads you will ever drive on, or rather ride on, considering the fact that you will be driving backwards up a hill without power. Ever since it opened in the 1930s’, the mystery behind the hill and its magnetic power has baffled everyone who visits it to this day to enjoy the strange ride. However, no proper explanation has been provided for the same till date. 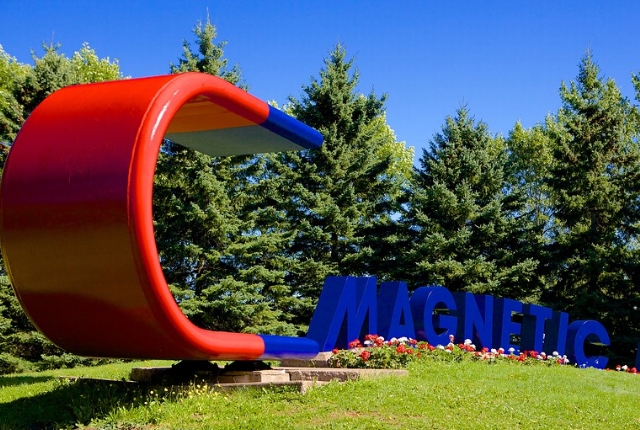 Scattered all over the Koekohe Beach on South Island in New Zealand are large spherical boulders that resemble the alien eggs we are so accustomed to seeing in movies. Studies reveal that these boulders formed many millions of years ago via minerals and sediments found on the sea floor which collected around a fossil. Some of these rocks are huge and have a circumference of even 12 feet and more. The mystery of their formation and appearance is still a subject of hot debate today. 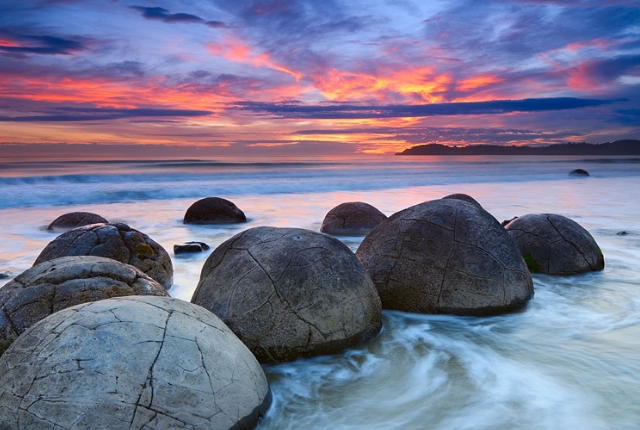 Can stones move on their own? Apparently the ones in Death Valley, California can! Said to sail on the surface of the valley, these stones mysteriously seem to travel long distances, leaving the trails of their travel behind on the dry earth. While scientists believe the formation of ice around the stones is responsible for this movement, a more proper explanation about the mysterious forces behind these movements is still warranted. 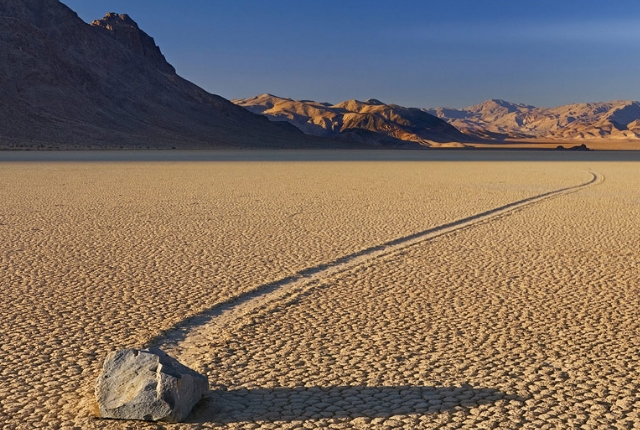 It goes by another name; the Eye of the Sahara. And it is not something that you can see clearly from the land. But fly over it and you will see the stark eye like structure staring at you from the desert floor. Said to be formed by a volcanic eruption or an asteroid impact, the eye features the shape of a sphere with equidistant rings on all sides, creating a mystery no one has been able to solve till date. 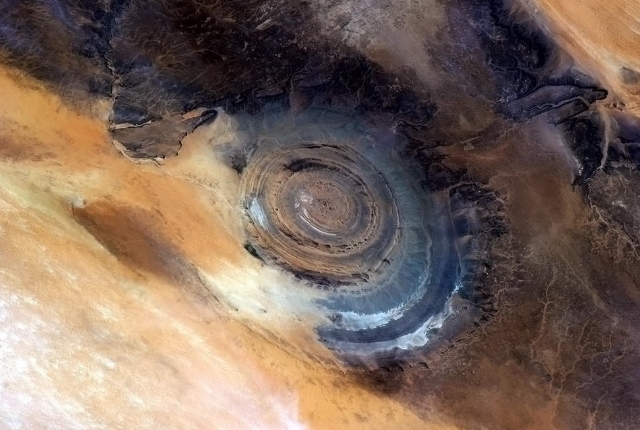 Everyone has heard about the Stonehenge and the mysteries that surround it. Dating back to 3000 B.C. this circle like formation features architectural forms in the form of individual stones purportedly from the Bronze and Neolithic Ages. Many scientists feel that these massive stones weighing at several tons each were transported from other regions and then assembled on site. But the way in which they were carried and transported in ancient times remains a mystery. 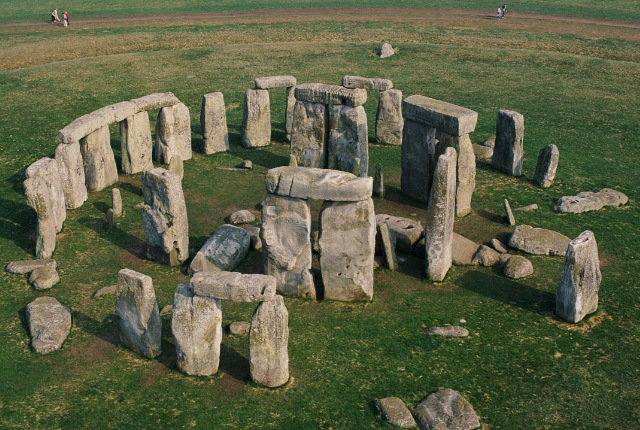 A visit to the Yellowstone National Park in California is never complete without visiting Old Faithful, one of the oldest and largest geysers in the country which in fact earned the park its National Park status. Eruptions occur between 50 to 120 minutes, with each eruption lasting for about 2 to 5 minutes. To this day, geologists remain fascinated by the irregularity of the eruptions as well as the lengthening of the mean interval time. 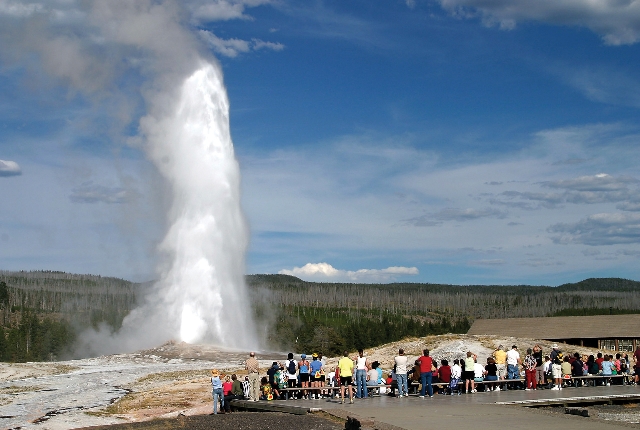 The Fly Geyser was in fact a manmade well which was drilled into the ground in 1916. After 45 years though, hot water started shooting out of it as a result of which the site was closed down.  The salts shooting out with the water dissolved over time to create colorful molds around the well that still shoot out water to heights of more than 5 feet. 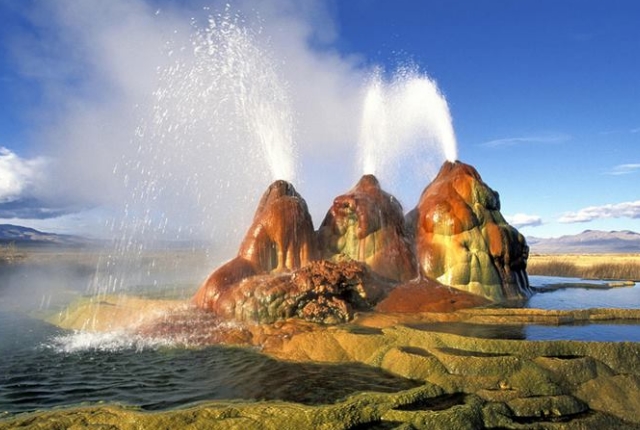 More striking than the tall trees in the Shilin Stone Forest in China is the sight of numerous monolithic stone structures standing in between them. Made of limestone, these towering formations intersperse with the trees to make the forest look as if it was made of grey stones instead. Hence the name! 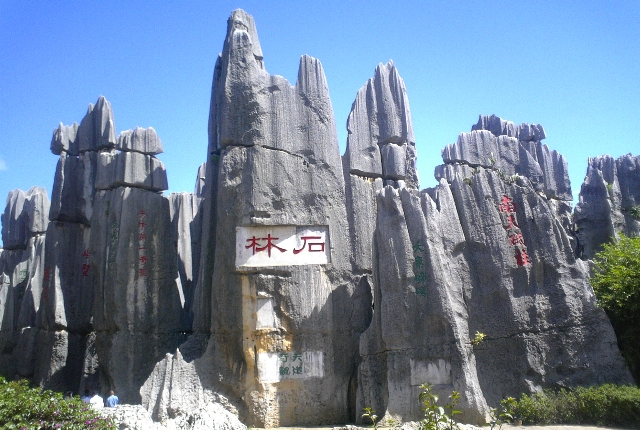 At first sight, these may look like a snow covered mountain dotting an otherwise hot landscape. However, a closer look will reveal numerous small pools filled with calcium carbonate deposits that give the entire area an eerie snow white look. The pools themselves are arranged naturally in the form of terraces that slope down the mountain, with the water in them reaching 100 degrees Fahrenheit at times. The place is a very popular tourist spot for visitors who flock to take bath in the hot water springs in order to cure their bodily ailments. 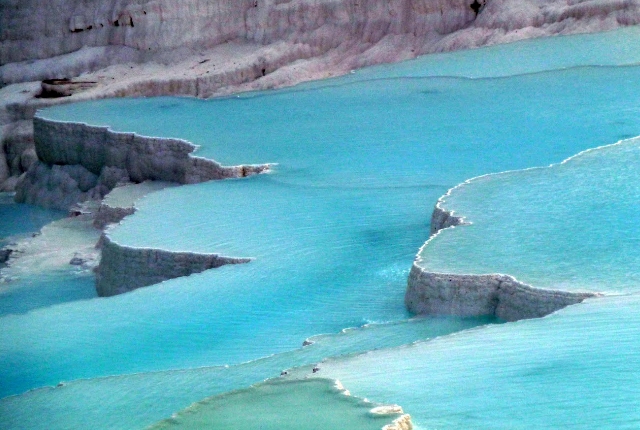 Called the ‘Most Beautiful River on Earth’, the Cano Cristales river will enthrall you with its plethora of colors. Come September and the river lights up in myriad colorful hues ranging from red, blue and green to pink and yellow, thanks to the underwater plants that bloom here for two months till November. Truly and enthralling and mysterious sight to watch! 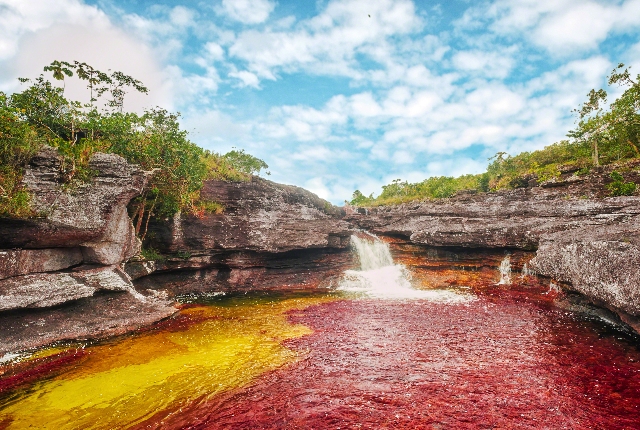 This may look like any other normal village in Norway. However, the mystery behind it is the fact that the sun never sets here from April to August every year. There is no night, meaning you get sunlight 24/7 for 4 months or so. And within a few days, it becomes very hard to tell the time as the sun wrecks your biological clock to the core. 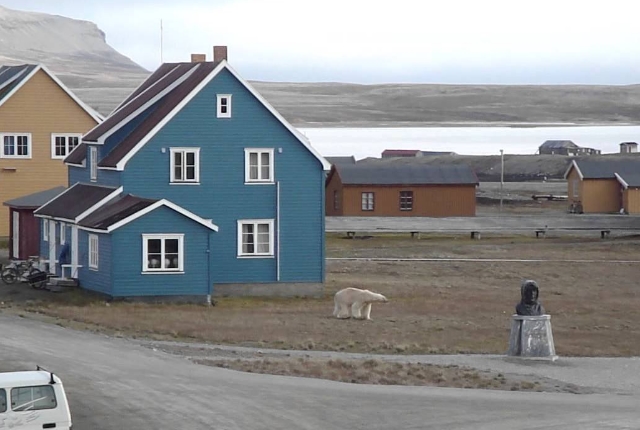 15. The Skeleton Lake of Roopkund

Situated at a height of 5029 meters on the Himalayan mountain range, the Skeleton Lake is an eerie glacial lake that reveals hundreds of skeletons and skeletal remains sitting at its bottom once the snow melts in the area. Scientists reveal that these remains may belong to the pilgrims who had lost their lives while visiting the place back in 850 A.D. Whatever be the reason, the sight of these skeletons arising out of the melting snow is enough to send shivers down your spine. 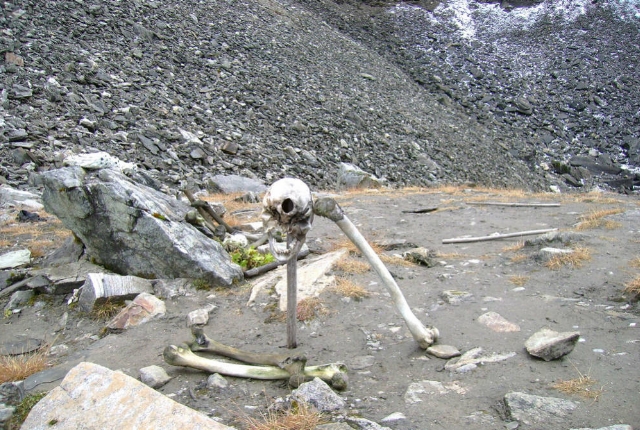 The Dumbarton Bridge is the sight of an eerie suicide zone, not for humans but for dogs. It has been said that over 50 dogs have jumped from the bridge to their death in the last 50 years. It is also said that they seem to jump off the same spot from the right hand corner of the bridge. Why they do so and what makes them do so is a mystery to this day. Many locals in fact, fear the bridge and never take their dogs anywhere near it. 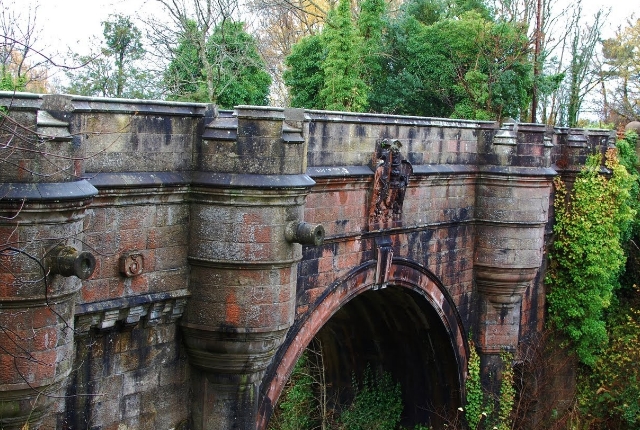 In maybe one of the most mysterious cases of purported alien abductions ever, an entire Inuit village called Lake Anjikuni was the sight of a mass disappearance in 1930. Upon arriving at the village, a trapper noticed the entire village was deserted, albeit food still cooking on the fire, rifles still loaded and clothing still left out to dry. It looked like all 30 of the village’s inhabitants just got up and decided to disappear from the face of the earth in an instant. Adding more to the mystery of the disappearance were the dogs that had been left behind and starved to death in spite of having so much of food to munch on. 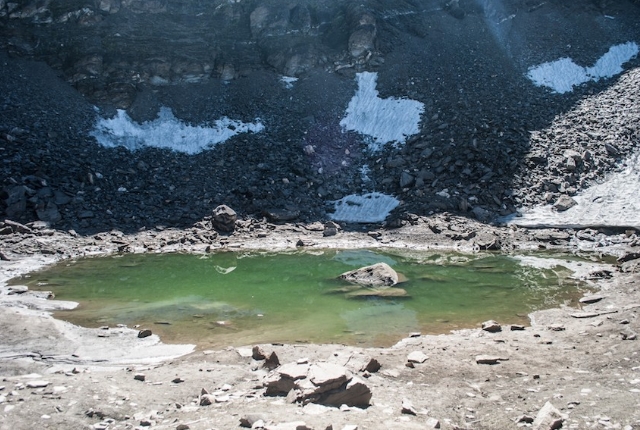 You don’t want to go anywhere near this forest if you are visiting Japan. Considered to have the second highest suicide rate on earth, the forest is said to be haunted by ghosts and demons that persuade those who enter it to take their lives. In spite of posting warnings and signs around the forest, police and forest workers still retrieve over 50 bodies from the area every year. Many forest workers also claim that the bodies move on their own and utter earth shattering screams at night. (Shudder!!!!) 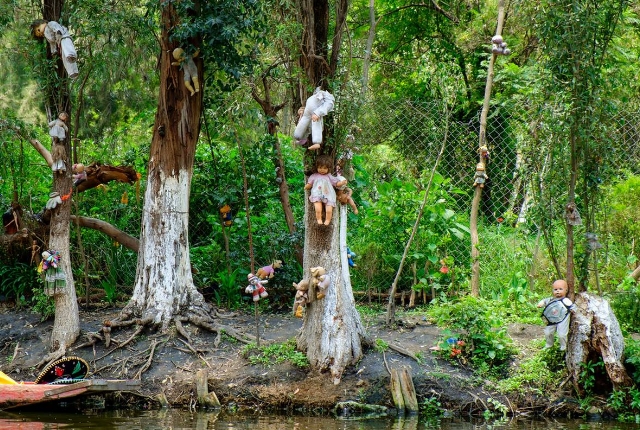 Trapped in time, the underwater city of Shicheng dates back to over 1341 years. Also called the Lion City, the city was totally submerged when the Xin’an Rive Hydropower Station was constructed over it in 1959. However, the city remains in good condition to this day thanks to the water which prevents it from rain and wind erosion. 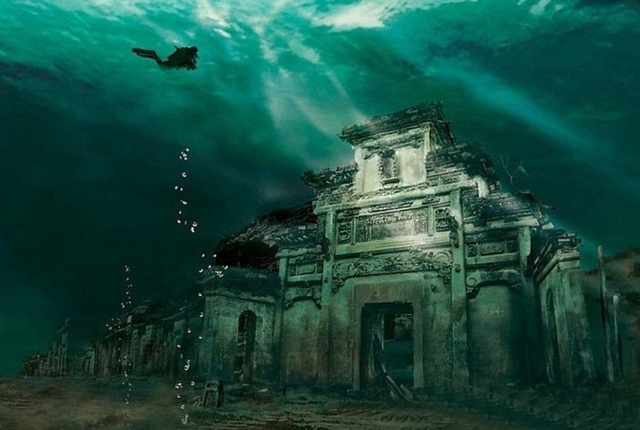 You may have heard of the Catacombs of Paris. While these are open to the general public, there is another more mysterious site called the Mines of Paris that remain sealed off to this day. Many consider these mines to be Gateways to Hell, a factor that maybe makes them so dangerous that officials are always on high alert to nab anyone who tries to enter the mines, lest they welcome back any unwanted spirit back to the world. 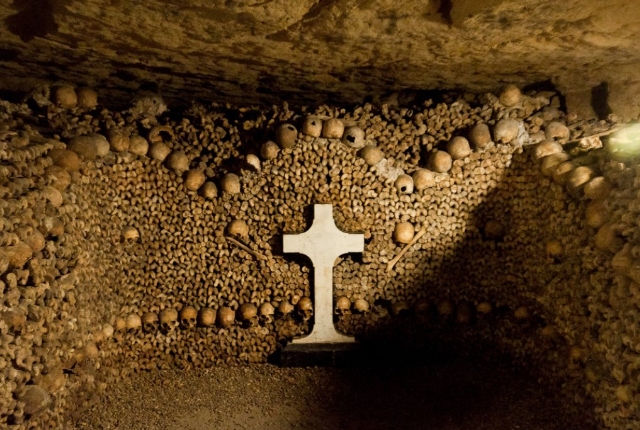