Caves are one of the most amazing creations made by nature. It leaves its visitors awestruck by its appearance. They hold the secrets of life and nature deep within them. While the caves are the structures which scare the visitors, as well as they are the entities which reflect aestheticism in its raw form.

Here Is The List Of The Most Beautiful Caves:

1. Cave Of The Swallows – Aquismon, Mexico

As the name suggests the cave is a home to many smaller species of birds. However, swallows are hardly found here. The species found here are white-collared swifts and green parakeets. The cave is made of lime stones. The cave is formed due to enlargement of a vertical fracture in the Earth. Evening you get to see the spectacular view of the Swifts circling the opening of the cave, around the thick patch of vegetation.

The cave has an adventurous streak to it, those who love to explore and also wish to have an adventure can opt for extreme sports in this cave. Rappelling is common here; but be cautious and avoid climbing down without a parachute, else the fall is 10 seconds. This is also a nice site for B.A.S.E. jumpers.

Romantic Era of literature is the era; when the literature was majorly influenced by nature. But, nature didn’t stop inspiring literary works and art with the end of Romanticism. The two famous names Jules Verne and Pink Floyd are inspired by these caves. The cave’s name is inspired from James Macpherson’s epic poetry’s hero Finn. According to the epic, Finn built the path connecting Ireland and Scotland to fight a giant. Thus, the cave must have been a part of that path. However, originally the cave was known as ‘Uamh-Binn’, which meant cave of melodies.

The most amazing feature of this cave is the basalt rocks which are in hexagonal shape. The shape is analogous to the shape of rocks on Giant’s Causeway. The shape is the gift of erosion caused by sea waves. This shape is the illustration of precision present in nature. The rocks appear to have been cut by a human. One could get a view of the sea as the cruises allow a walk into the cave. The sea appears mesmerizing from within.

This cave is a far-fetched work of water that entered calcareous rocks and worn them over the time period. The chemical and mechanical method involved in the formation of this lake is called dissolution of rock.

According to the Greek mythology, the lake was the residence of nymphs. The nymph Melassini committed suicide as Pan did not answer her love.

The cave is surrounded by forest and opens into an underground lake; with crystal clear water. While boating on the lake, the boat seems to be gliding in the air. 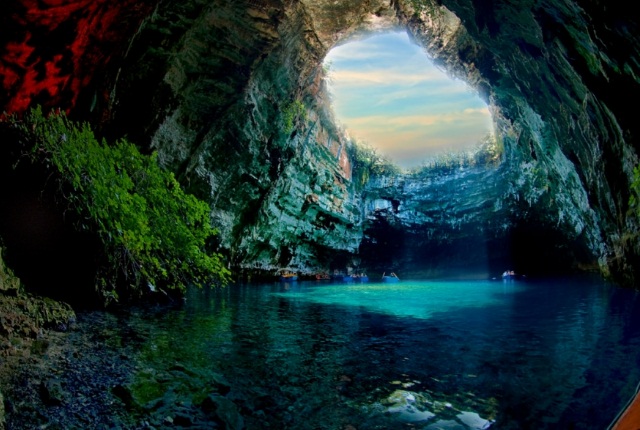 Every one of us loves to sky on a new moon night. These Waitomo caves also have its own personal stars; highlighting the ceiling of the cave. These are Arachnocampa Luminosa, the colloquial glow worms. These worms are exclusive to New Zealand. The cave is made over 30 million years. They are formed by volcanic eruptions. The caves were under water; while there were volcanic eruptions. The place was below sea water level for many years. This can be seen and clarified by the fossils of corals, fish skeletons, seashells and deposits layers of rocks over this extended time period.

The deposition of lime stone has given rise to a peculiar structure formed in the caves due to dripping of water; i.e., stalactites and stalagmites. There are guided tours excused to the caves. Also, it is very necessary to maintain ecological balance inside the cave to save the biotic life in the cave. 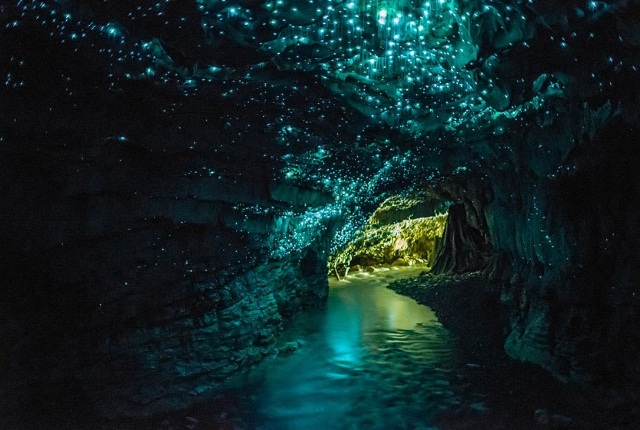 The name ‘Hang Son Doong’ means ‘mountain river cave’. The cave is freshly discovered in 2009. The river following its path, eroding the stone; wherever found it weak, turned out to be the largest cave in the world. It is 9 km long and 200 meters in height. The cave is covered with dense rain forest. Due to the erosion of weak stone, and nothing to sustain, the ceiling collapsed; making the way for flora to flourish. This recent discovery is attracting tourists from all over the world. The flood of tourists is creating a threat to the delicate system of the cave. However, locals believe that flourished tourism will improve their standard of living. 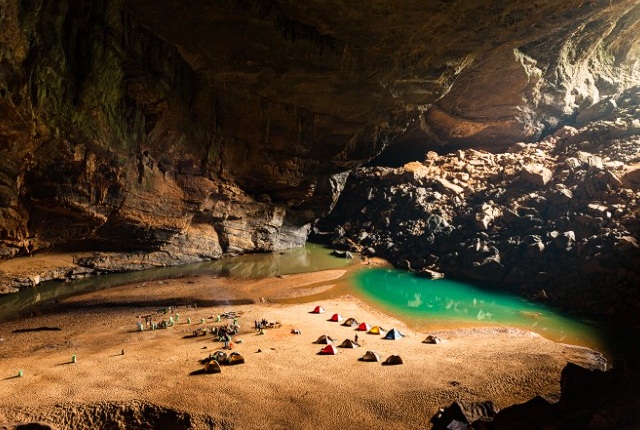 The cave gives you a heavenly feeling. The cave has a lake inside, the color of the water is azure. The clear water transcends you to an alien world. The cave has a very narrow entrance where only a boat can pass at a time. The azure color of the lake is the reflection of light coming from the entrance. The opening is partially below the water reflecting radiant blue. 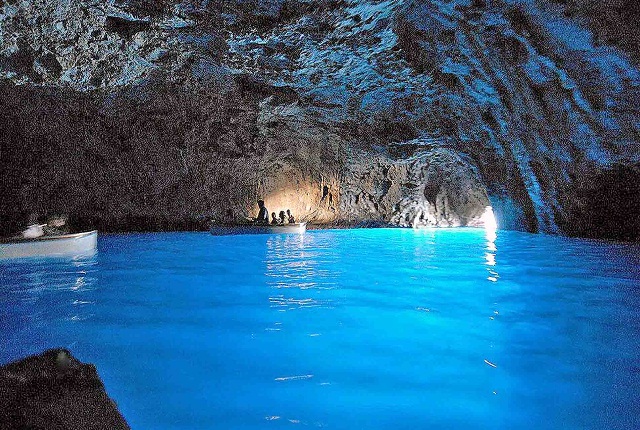