Scuba diving is one sport and activity that can never go out of fashion. It’s something you can do the year around as well, depending on your choice of location that is. And if you are on the hunt for a remarkable diving location that is guaranteed to give you some of the best glimpses of the underwater world, take a note of these 13 dive sites located around the world.

Located near the Sipadan Island, this is undoubtedly the No.1 dive spot in the world. The site gets its name from the thousands of barracuda that surround you while diving here. The giant coral wall is also home to several other marine animals, including white tips, grouper, jacks, turtles, bumphead parrotfish and plenty of sharks on the hunt for prey. 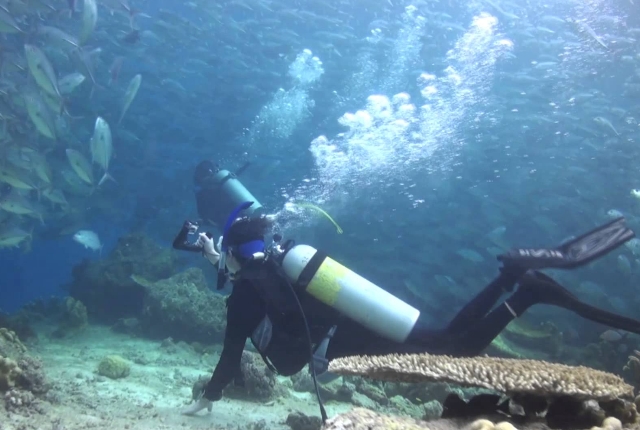 Located off Queensland coast, the SS Yongala is another dive site you definitely need to visit. The site houses the wreck of the Yongala steamer which was sunk near Townsville in 1911 by a cyclone.

The now most famous dive site in entire Australia is home to some of the most amazing varieties of marine life you can possibly lay eyes on, including barracudas, sea snakes, giant Trevallies turtles, tiger sharks, bull sharks, manta rays, octopuses and of course the spectacular coral gardens, etc.

If the marine life bores you, you can always choose to explore the sunken steamer which unfortunately took the lives of 122 people on board it when it sunk. 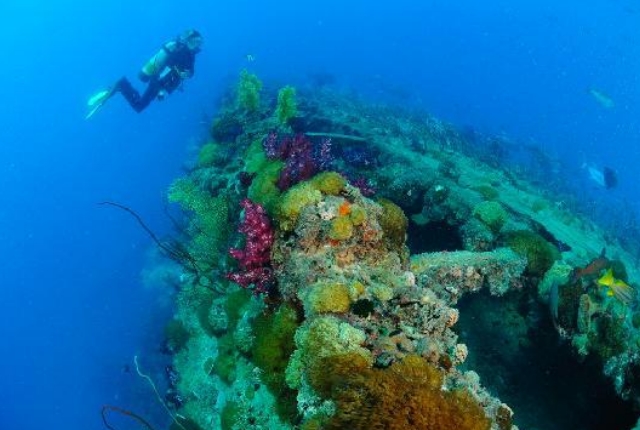 Located near Palau, this splendid dive site houses a gigantic coral wall filled with all sorts of marine life like morays, mantis shrimps and nudibranchs, etc. These are more than enough to turn the area into a feeding ground for several creatures of the sea, including eagle rays, barracudas, sharks, snappers, jacks and Napolean wrasse. Just be sure to stay away from the crowds during feeding time. 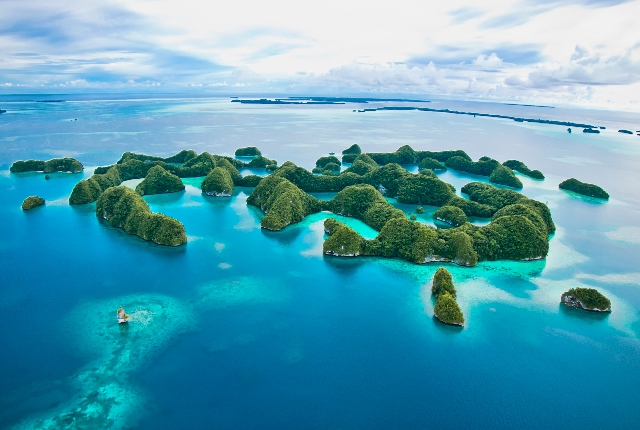 Sitting on the Osprey Reef (a part of the Great Barrier Reef), the North Horn dive site can be reached only via Liveaboards. The natural underwater amphitheater boasts of housing some of the largest variety of sharks on the planet. Expect to see plenty of Silvertips, Hammerheads and Grey Reef sharks swim around you while diving. Want to pump up your adrenaline? Visit in time for lunch when the feeding frenzy of the sharks will astound you. 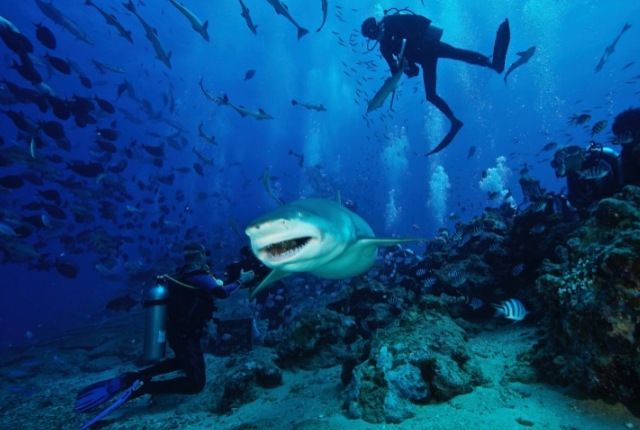 Located on the Egyptian Red Sea which is world famous for its fantastic diving locations, the Thistlegorn is a ship wreck of the British vessel with the same name. The cargo ship was sunk in 1941 while carrying war supplies. Now, sitting at the bottom of the Egyptian Red Sea, the wreck boasts of an impressive dive site filled with spectacular coral gardens and marine life. Be wary of strong currents near the surface and around the wreck though. 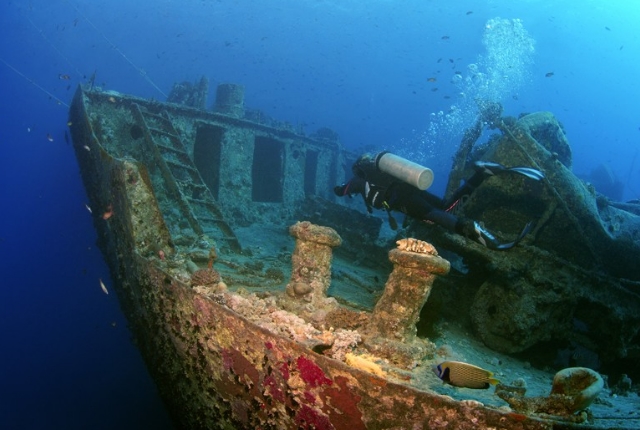 Another gem in the Egyptian Red Sea, the Shark and Yolanda dive site offers you the rare opportunity to visit an underground city, a shark reef and the Yolanda wreck site. Drift dives are popular in this area which also attracts a lot or pelagic fish. Diving excursions usually start at the underground Anemone City before moving onto Shark Reef and a spectacular drop off. They finish off at the Yolanda wreck, offering you a glimpse of a wide variety of marine life as you drift with the current. 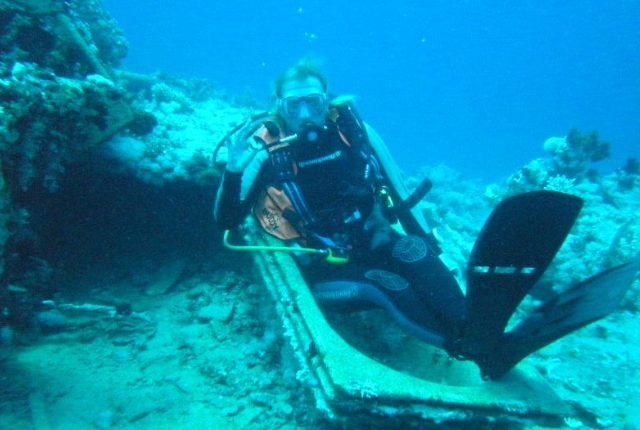 Located near the Komodo Island, Batu Bolong aka ‘Hollow Rock’ is home to a gigantic underwater rock that is literally teeming with coral and reef life. Expect to get surrounded by so many fishes that you might worry about losing your dive buddy. Some of the more popular marine creatures you can expect to see here include barracudas, dogtooth tuna, giant trevallies turtles, whitetip reef sharks and Napoleon wrasses. 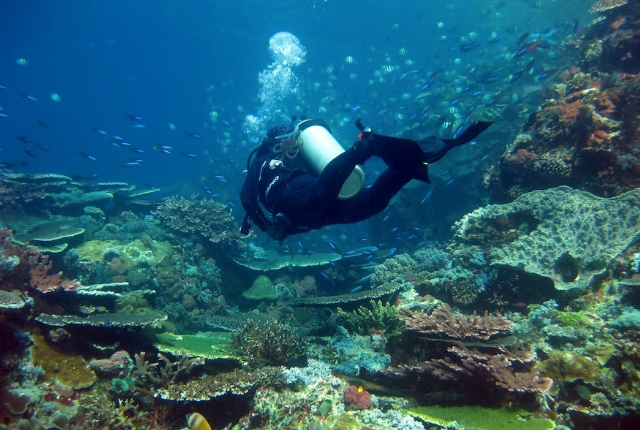 As daunting as it may look from above, the Great Blue Hole in Belize is one of the most amazing dive sites in the world. The very, very, very deep hole features walls covered by coral reef teeming with marine life. Be amazed to see shoals of fishes dive down at least 15m to clean themselves in the fresh water zone (don’t believe us? Take off our mask and try to taste the water). Dive down another 25m to explore the myriad underwater caverns filled with stalagmites and stalactites. 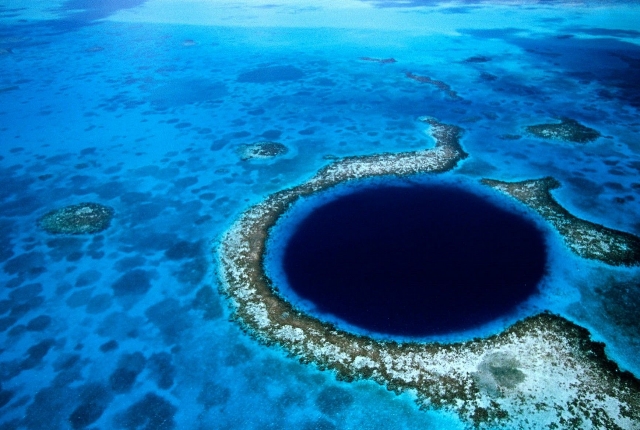 Located near the Surin Islands, Richelieu Rock is another world famous dive site that lets you enjoy the rare opportunity to get up close with a giant Whale shark. Also called as the ‘Whale Shark Magnet’, the rock is also home to several other varieties of fish and marine life, including big pelagic fishes that are never shy away from staying around for a photograph. 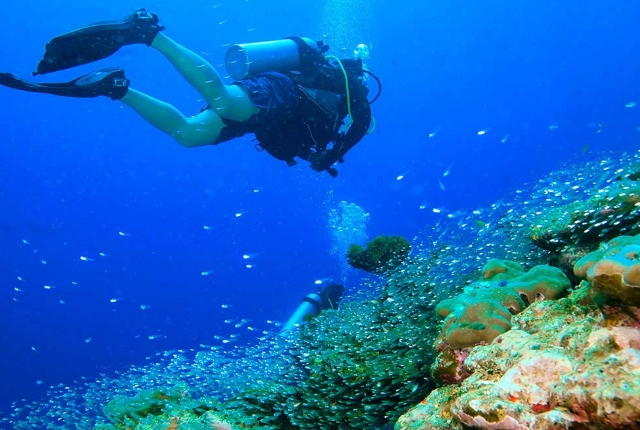 If you love manta rays, then you definitely need to visit this dive site located in Kailua Kona, Hawaii. The area has been set up with underwater lights to attract plankton which, in turn, attracts the majestic manta rays of the region. Expect to get surrounded by these creatures during feeding time. But be wary of getting too close to them lest you get hurt accidentally. 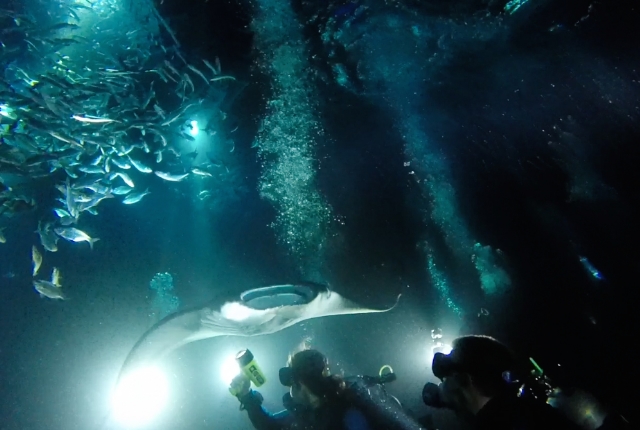 Located off the coast of Western Australia, the Navy Pier is a T shaped structure that is at least 300m wide and extends for about 300m from the shoreline. Although it may sound like a very s small dive site in comparison to the other sites we have talked about so far, it makes up for the same by housing thousands of varieties of coral, reef and marine life. Nighttime dives are quite popular here, offering you the chance to catch glimpses of flatworm eels, nudibranchs, white tipped sharks, woebegone, lion fish, octopuses, scorpion fish, stargazers and smaller finned fishes. You can also expect to see a few manta rays dozing off blissfully on the seabed. 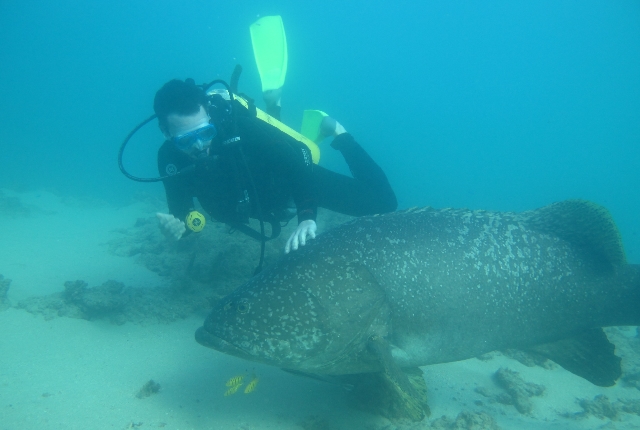 The Crystal Bay in Bali is home to one of the most mysterious fishes on earth, the Mola Mola Oceanic Sunfish. The giant and rather strange looking creature is extremely hard to find at any other dive location in the world. Of course, that doesn’t mean the area is devoid of other kinds of marine life. Visit the region between August and October and you will enjoy an amazing dive that will remain in your memories for years to come. 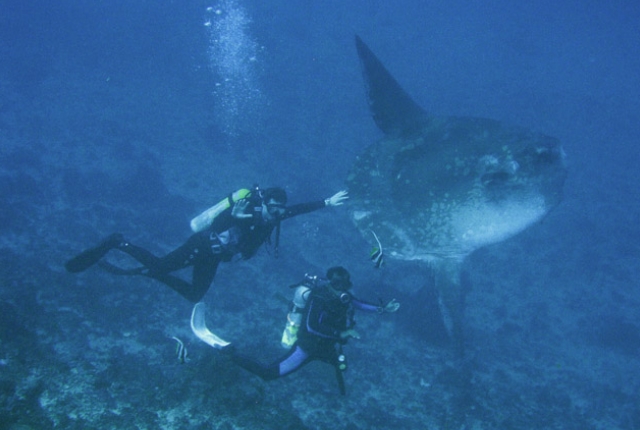 Located near the island of Bali, the Liberty dive site is one of the most photographed underwater locations in the world. Covered to the hilt with corals, anemone and gorgonians, the site is home to thousands of fishes that are rather tame and don’t mind human visitors, especially if they get fed by the same. The black sand on the seabed offers a great contrast for these colorful fishes and corals, and on any given day, it would be very easy to spot over 400 species of fish here. Some of the more common ones that will gladly swim by you include the goatfish, wrasse, surgeonfish and the unicorn fish. 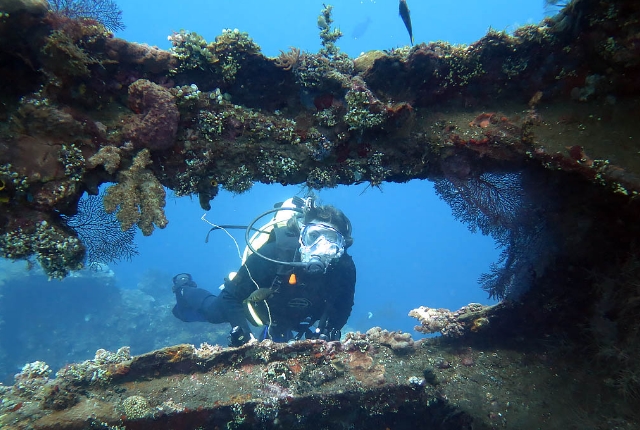