The town of Seville, the capital of the Andalusia region, is famous for its ‘Joie de vivre’. This sun drenched city is famed for its spectacular cathedrals, Roman ruins and beautiful museums. Its rich Moorish past has left an indelible mark on Seville – one of the most charismatic cities in Europe. The traditional restaurants of this city serves food which nourish not just the body but also the soul. To discover some of the truly fascinating things to do in this ever evolving Andalusian metropolis, read on.

Here Are 8 Fascinating Things To Do In  Seville, Spain:

1. Gaze At The Magnificent Giralda

The Giralda tower, one of the most magnificent monuments in Seville, Spain, has dominated the city skyline for over 800 long years. La Giralda or The Giralda, which has undergone extensive renovations over the centuries, is a unique blend of Moorish and Renaissance architectural influences. Giralda is the last of the three remaining minarets of the great 12th century Almohad mosque. The construction of the Giralda tower commenced in 1184 and ended in 1198. Today, this resplendent structure functions as the bell tower of the Seville Cathedral. 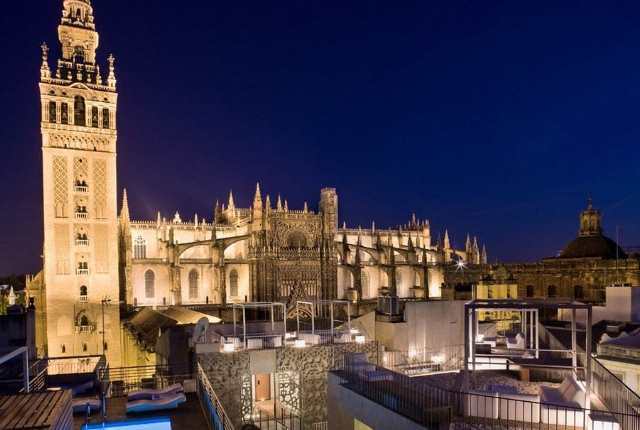 The iconic Plaza de Espana, which is located in Maria Luisa Park, was designed by the architect Anibal Gonzalez, for the great Ibero-American Exhibition of 1929. This semicircular plaza which covers an area of about two hundred meters is decorated with stunning multicolored ceramic tiles. The plaza is flanked by two regal towers. The towers edge an enormous central building. Visitors to this square can also gaze at the beautiful semi circular arches and the massive central fountain which dominate Plaza de Espana Square. 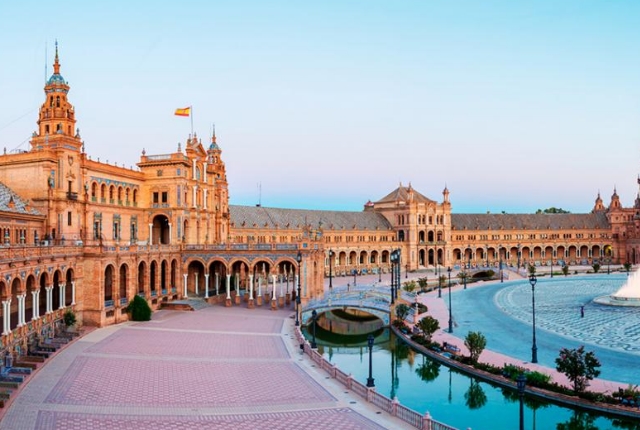 3. Explore The Alcazar Of Seville

The grand Alcazar of Seville is a massive fortified palace complex that has evolved continuously over the centuries. The construction of the Alcazar Palace, which has been a work in progress for hundreds of years, reflects several distinct architectural styles.

Some of the best craftsmen from across Andalusia were employed to create the exquisite interiors which reflect the Mudejar style of architecture. 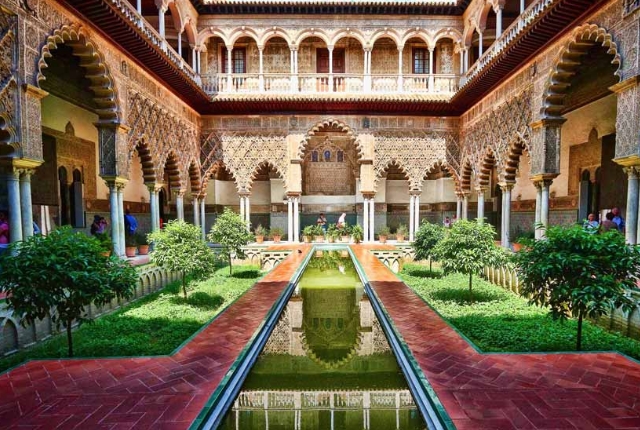 The imposing Seville Cathedral, a UNESCO World Heritage Site, is an artistic expression in stone of the post re-conquest self -assurance and wealth. The largest Gothic church in the world, the Seville Cathedral occupies a mind boggling area of almost 11,520 square meters.This stunning cathedral was built on the site of the twelfth century Great Mosque. The construction of this gigantic church lasted for over a century, from 1401 to 1506.

Inside this grandiose structure, visitors can gaze at the immense central nave, which rises heavenwards, to a height of almost 42 meters.

The stunning stained glass windows, the intricately carved choir stalls, the attractive vaulted ceiling, the numerous chapels, priceless paintings and the beautiful iron screens are not to be missed. The Seville cathedral also houses the remains of the great explorer, navigator and colonizer – Christopher Columbus. 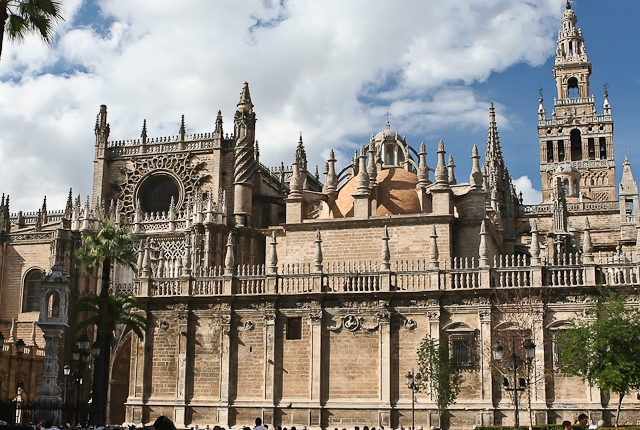 Park de Maria Luisa which is also called the Maria Luisa Park is one of the most spectacular public gardens in the city of Seville in Spain. The park borders the meandering Guadalquivir River.

An extensive portion of the grounds which make up this scenic park was donated by Duchess of Montpensier to the city of Seville in the late 19th century (1893 to be exact).

The attractively landscaped park abounds with numerous stunning gardens, fountains, statues and ponds. The park also houses the Plaza de Espana and the Plaza de las Palomas. The Museum of Popular Arts and Customs, functions out of a historic building, which is located inside the park. 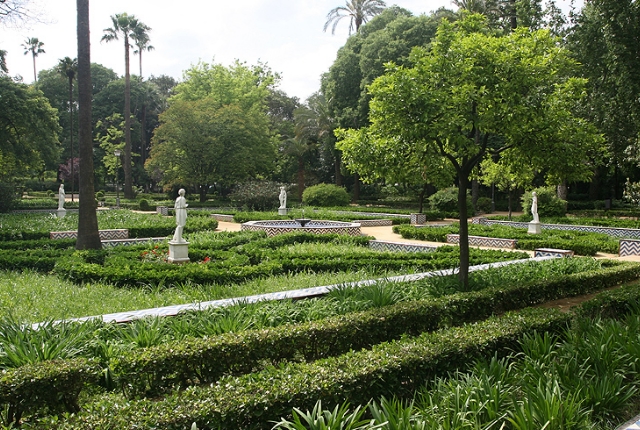 Torre del Oro or the Golden Tower, one of the noteworthy and emblematic monuments in Seville rises majestically from its location on the banks of the River Guadalquivir. This stunning tower was constructed in the first half of the 13th century, towards the end of the reign of the Taifa Kings. This dodecagonal shaped tower was constructed to protect the entrance to the port. Today, the interior of this tower has been converted into a naval museum which is spread over two floors. 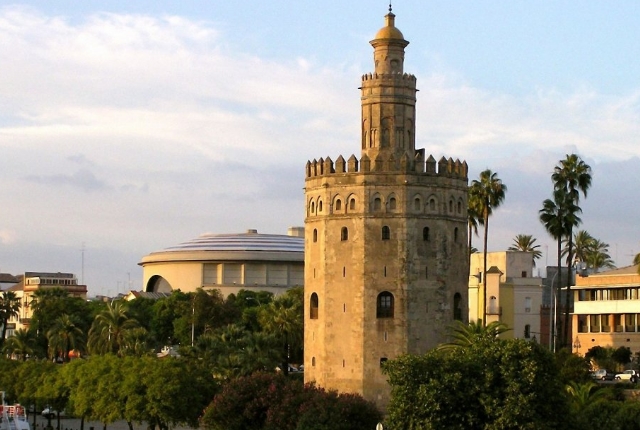 7. Explore The Museum Of Fine Arts Of Seville

The Museum of Fine Arts which was inaugurated in 1839 is one of the best fine arts museums not just in Seville but in all of Spain. This museum functions out of a former convent. The Museum of Fine Arts of Seville has a brilliant display of rare works of art from the medieval ages to the 20th century. This museum also boasts of an awesome collection of artwork from the Sevillian Golden Age. The museum has expanded considerably in recent years after purchasing several priceless works of art. 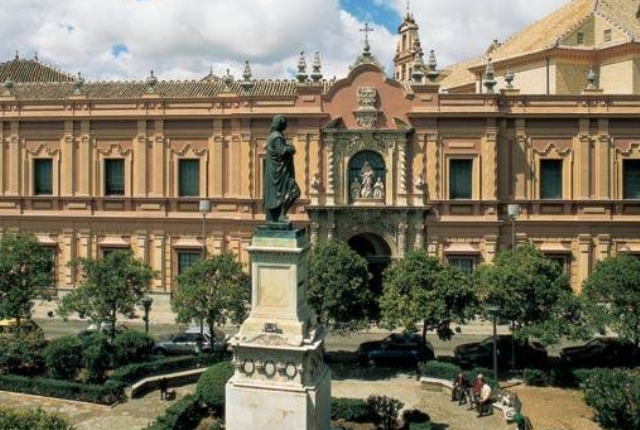 The pulsating heart of the historic center of Seville, the Barrio Santa Cruz extends all the way from Seville Cathedral to the Plaza de la Alfalfa. The Barrio Santa Cruz is complex network of centuries old streets and alleyways which are bordered by charming restaurants and quaint plazas. A walk around the Barrios Santa Cruz which formerly served as the Jewish Quarter of the city, is the best way to imbibe the intrinsic charm and atmosphere of the area. 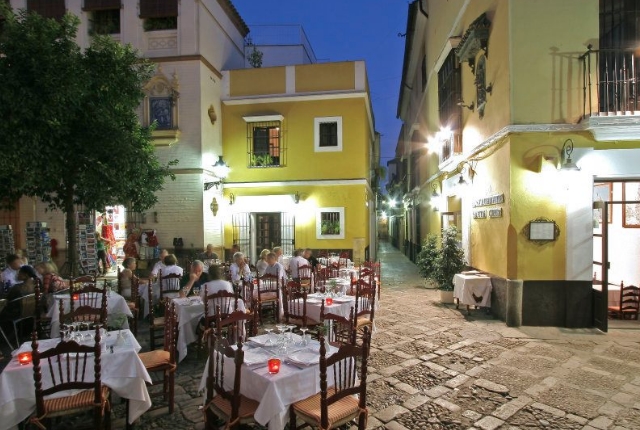