Volcanoes have always had a fear-inducing yet awe-inspiring effect to them. Many volcanoes have been around for quite some time and have had civilizations formed and wiped off around them. Though many volcanoes are active and spewing lava all over, there are the dormant and extinct types too. Because of their reputation, volcanoes have always attracted attention to themselves. Many thrill seekers over the years have scaled them and have got a peek into them. Because of the curiosity they generate, many volcanoes around the world attract a lot of visitors and due to this reason these volcanoes are accessible with proper arrangements in place at these sites. The chemical composition of the lava makes the region around the volcanoes fertile, and over the centuries, volcanic landscapes formed around these have turned out to be very remarkable. Europe has its own share of deadly and breathtaking volcanoes. Let us have a look at the 4 most visited volcanoes in Europe.

A List of Volcanoes in Europe That Are Not to Be Missed:

Italy’s Mount Etna is an active volcano on the island of Sicily. It stands tall at a height of 3,329 meters and is the tallest active volcano in Europe. Its level of activity is so constant and frequent that the latest eruption to hit the news was in March 2017. But despite its highly active nature, tourists are able to visit Mount Etna all year round safely unless the authorities state that the conditions are not safe for visits. Mount Etna is listed in the UNESCO World Heritage Site. The landscape of this volcano is very stark as it includes oozing lava flows, volcanic craters and barren lava fields with black sand

The rich nature of the volcanic soil has supported the agriculture of this region dotting the landscape with woods, vineyards, and orchards. In the winter months, this volcano converts into a ski resort.

This volcano attracts visitors in thousands every year. The volcano can be scaled by foot or visitors can use a cable car from the base and later use a minibus to reach the main crater at about 2,800 meters with the assistance of an authorized guide. There is also the option of travelling by the Circumetnea Railway that goes round the base of Mount Etna and provides a scenic three-hour ride of the surrounding landscape. Apart from the thrilling experience of visiting an active volcano, the wines produced in this volcanic ash are considered unique and worth a visit to Sicily just to try it out. Another once-in-a-lifetime experience that Mount Etna provides is the spectacular show of lava explosions that visitors can see from a safe viewpoint if they are lucky to be around during eruptions. 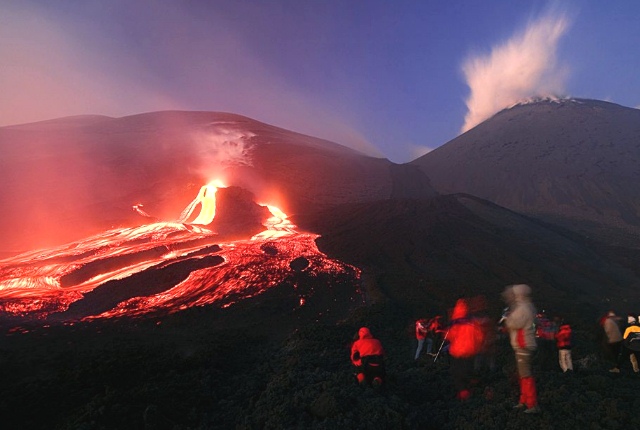 Italy hosts another famous volcano, Mount Vesuvius. This fire giant broods dangerously over the populated city of Naples. It is a dormant volcano erupting last in 1944. Mount Vesuvius is undoubtedly the most visited volcano in Europe. It stands at a towering height of 1,281 meters and the peak consists a 1.2 mile big crater from which gases can be seen leaking out from various vents.

The summit also rewards you with the amazing view of the city of Naples, the beautiful bay of Naples and the neighboring towns like Pompeii.

The volcano can be reached from Naples or Sorrento by the Circumvesuviana train. The base of the volcano can be reached by shuttle buses or cars from the city of Ercolano or Pompeii and from there a hike up the moderately steep slope of the volcano for about 200 meters takes you to the edge of the main crater. The volcano is situated in a national park Parco Nazionale del Vesuvio that offers nature trails for the nature lovers to explore. Pompeii, the ancient Roman city that was completely ruined in A.D. 79 during Mount Vesuvius’s eruption, was preserved under the volcanic ashes intact and is now a most visited tourist site. 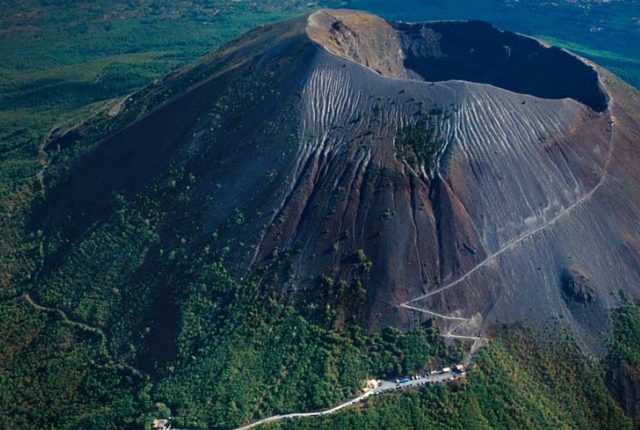 The uniqueness of this southern Icelandic volcano and many others in this region is that the volcano is covered by an ice cap. Eyjafjallajökull is actually the name given to the glacier on top of the active volcano that recently erupted in 2010 sending a huge cloud of ash in the sky and disrupting air traffic. The ash cloud subsequently subsided leaving behind a landscape of black and white glaciers. At an elevation of 1,651 meters, the summit offers spectacular views of the highlands of Iceland with its glaciers, rivers, waterfalls, volcanic lava flows, fresh lava fields and craters.

Eyjafjallajökull can be viewed in its full beauty while hiking over the Fimmvörðuháls ridge on the famous Fimmvörðuháls hiking trail. This 25 km hike will let you see not only Eyjafjallajökull but also its famous neighbor, Katla, the most powerful volcano in Iceland. A non¬sweat-breaking way to view the beauty of this glacier covered volcano is in the comforts of a helicopter.

Puy de Dôme is the youngest and the highest volcano in a chain of volcanic mountains, the Chaine des Puys, located in the Auvergne region in central France. These volcanoes have been dormant for over 7000 years, though there is volcanic activity happening way below. The landscape of this region is filled with lava domes, lava cones, crater lakes and hot water springs, making it a very beautiful place worth visiting. This region is the largest volcanic area in Europe. And Puy de Dôme is the most visited volcano in France and is awarded the label Grand Site de France.

The Puy de Dôme stands at an elevation of 1,465 meters and its summit offers a stunning view of the 80 volcanoes neighboring it, the city of Clermont-Ferrand, and the mountains and plains beyond.

The peak of this volcano is accessible all year round by the Panoramique des Dômes, a rack-rail train with panoramic windows that allow one to see the splendid 360° views of the surrounding landscape as the train ascends circling the mountain. For the nature lovers and the intrepid explorers, the volcano also has a couple of hiking trails and the top can be reached by hiking through the surrounding woods and by passing a volcanic crater. Puy de Dôme is also a hotspot for paragliders, providing interested tourists with another activity to pursue while at this place. Another place of interest with respect to archaeology on Puy de Dôme is the ancient Roman Mercury temple that dates back to the first century AD excavated in 1873.

All of the above volcanoes are thoroughly monitored by geological observatories, so make sure to visit their websites to check for the conditions of these volcanoes before your travel dates. Having been to two of these volcanoes myself, I feel experiencing these amazing wonders of nature must be a part of everybody’s bucket list.