Talk about a beach and the first image that comes to your mind is that of white, sparkly sand beneath your feet. Of course, a white sandy beach is quite captivating. But there are many other beaches around the world that feature shores in a plethora of colors other than white. Take a look below at some of these beaches which are considered as the most colorful in the world.

Here Are Top 16 Most Colorful Beaches In The World:

You can never see sand in a whiter shade than at the Hyams Beach in Australia. So much so that the beach is the proud holder of the Guinness World Record for having the whitest sand on earth! Just one look at the snow white sand is enough to mesmerize you to the point that you actually don’t want to step on it for fear of dirtying it. If you do choose to venture onto the beach though, make sure you follow your beach lounging activity with some sailing, surfing and snorkeling in the Jervis Bay. 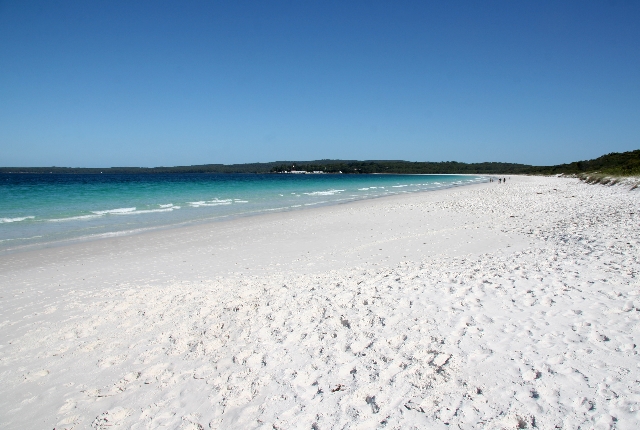 The Horseshoe Bay Beach in Bermuda is world renowned for is blushing pink shore. The rosy pink color on the sand is attributed to the presence of a combination of coral, crushed shells and calcium carbonate. You would want to visit the beach in the evening when it is at its rosiest best under the glow of the setting sun. 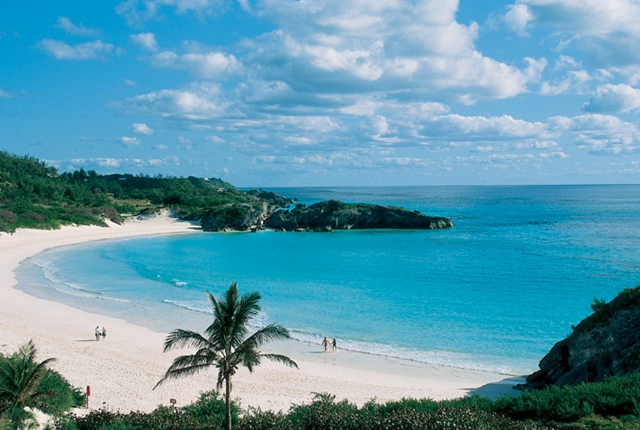 Rated as one of the top five beaches on earth year after year, the Pink Sands Beach in Bermuda owes its three mile stretch of naturally pink shore to marine organisms called foraminifera which provide the beautiful rose colored hue to the sand. The red shells of the organisms mix with the white sand to create a mesmerizing pink shade which makes the beach a must visit! 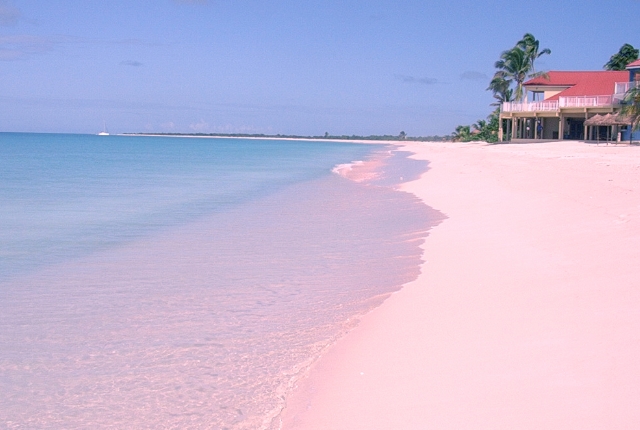 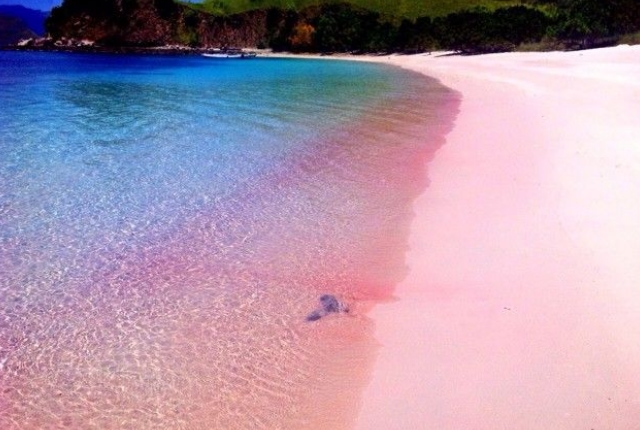 Located on the northern coast of the island, the Porto Ferro beach in Italy is filled with ochre colored sand. The orange hue is provided by the numerous crushed shells on the beach which mix with orange limestone and volcanic deposits. The best view of this color which gives way to the crystal blue water in a contrasting manner is from above the gigantic sand dunes (some of them reaching heights of 65 feet and above) located right behind the beach. 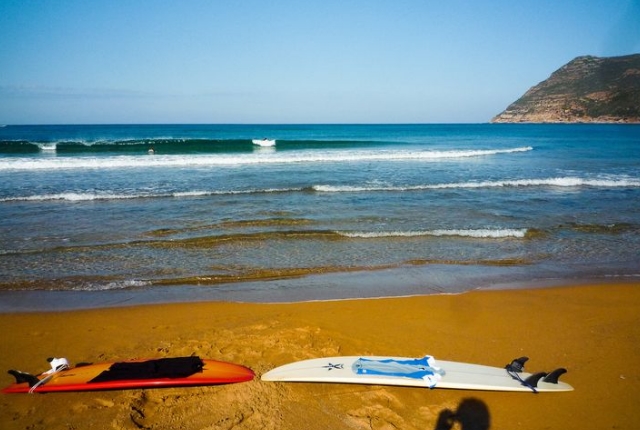 Also called as Reynisfjara, the Vik Beach is located on Vik Island and is considered as one of the most famous black sand beaches in the world. The stark black color of the sand is courtesy the myriad lava deposits that flowed from the nearby Katla Volcano, mixed with the icy cold waters of the sea and hardened. Over the years, the hardened lava broke into tiny fragments which were then washed ashore to create the bold, dramatic and strangely eerie black sand beach that the island is now famous for. 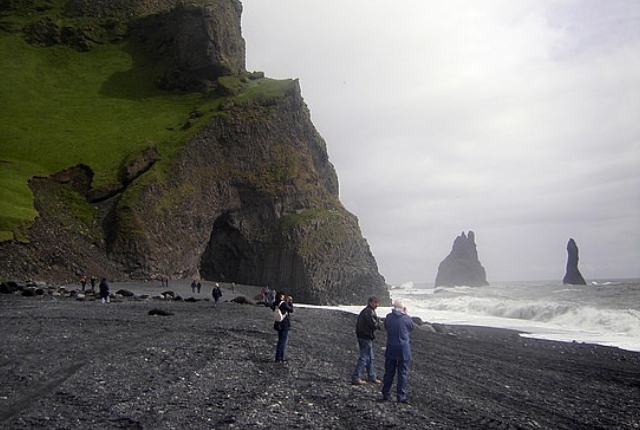 The lava that flows from two active volcanos called Kilauea and Mauna Loa is responsible for the jet black sand that covers the Punalu’u Beach in Hawaii. Located on the southern shore of the Big Island, the black sand beach will captivate you with its black sand which mixes with the contrasting blue waters of the sea in a mesmerizing way. The beach is also famous for its inhabitants, two endangered species of turtles (the hawksbill turtle and the green turtle) which frequent the black sandy, shore often.

Auckland is home to a black sand beach that actually sparkles! The Muriwai Beach is covered in black sand which also contains materials like titanium and iron deposits from nearby volcanoes. These materials lend a sparkly glow to the black sand which glistens under the sun for almost 37 miles along the region’s west coast. 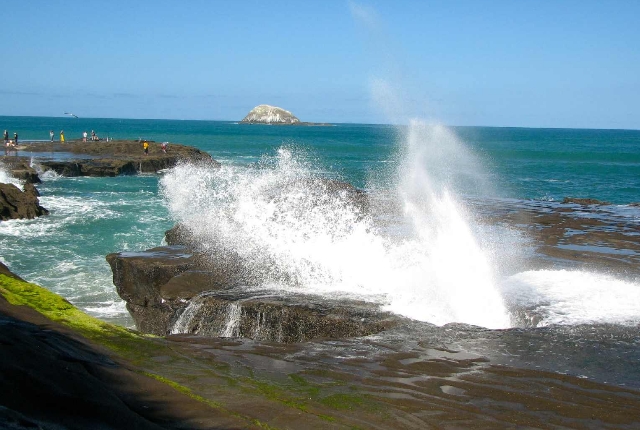 Located on the island’s southeastern coastline, the Kaihalulu Bay beach boasts of housing a striking red colored shore. The red colored sand is due to the deposits of the erosion that occurred at the Ka’uiki Head cinder cone. The red sandy shoreline gives way to the mesmerizing turquoise blue waters of the sea in what can only be called a dramatic sight. 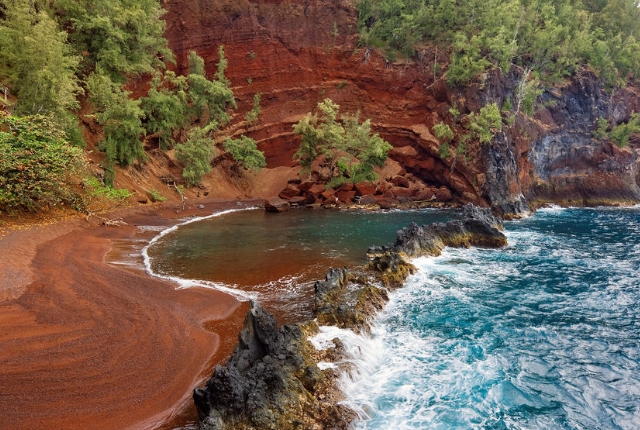 The Red Sand Beach in Canada is filled with iron rich sand that lends it a natural red shade. The red color is in fact caused by rust which is formed when iron in the sand mixes with oxygen in the water and air to create iron oxide. The island is also home to several other red sand beaches, with the southern shore especially famous for having different shades of red colored sand from fiery hues to pink and champagne. 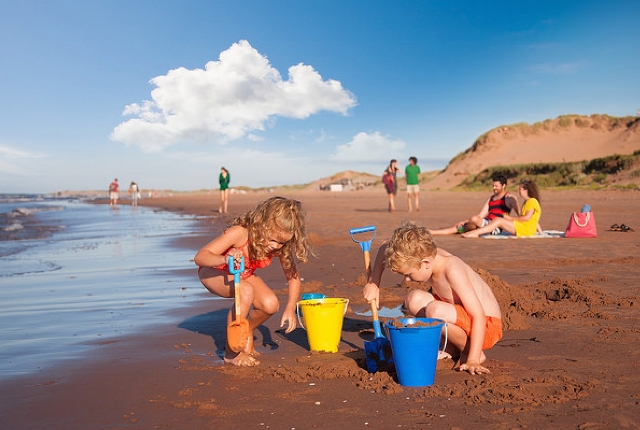 The Kokkini Beach in Greece has the perfect backdrop for its naturally red colored shore; dramatic red cliffs on one side and the crystal blue waters of the Mediterranean Sea on the other. The red color of the sand on the beach is due to the red and black lava rocks from the nearby Thira volcano which is credited with shaping Santorini entirely when it erupted back in 1450BC. Apart from the Kokkini Beach, there are many black and white sand beaches in Santorini that warrant a visit as well. 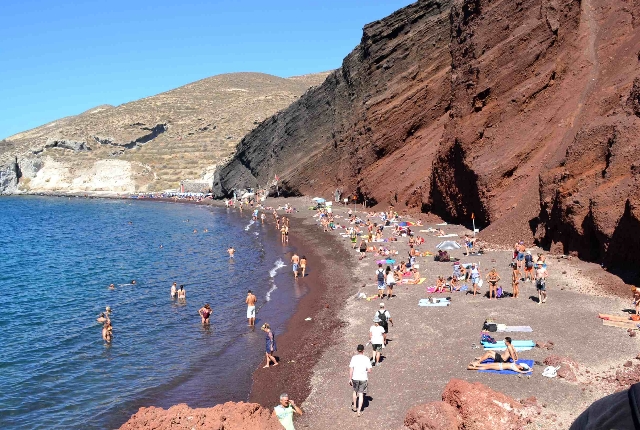 Another beach you need to visit while on Big Island is the famous Papakolea Beach. The beach is covered in deep green sand owing to the presence of a mineral called olivine which washed ashore from the volcanic cone nearby. Surrounded by towering sea cliffs, the beach lies off the beaten path. Getting to it will require a three mile hike. However, the views you will be rewarded with later on is well worth the time and effort. 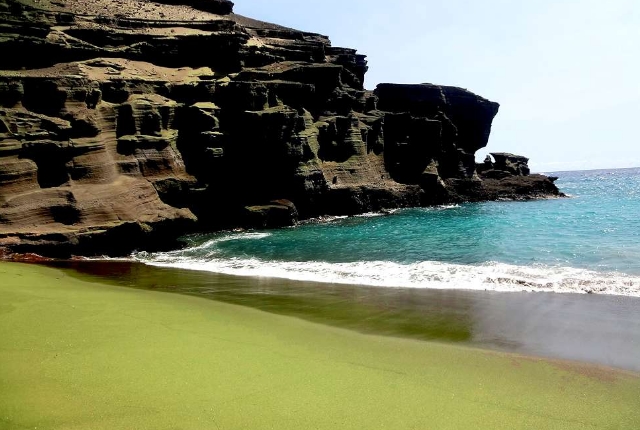 Walk over to the Pfeiffer Beach in the Los Padres National Forest and you will be greeted with the sight of a shore covered in swirls of dark purple and violet sand. The beautiful swirls are the courtesy of the quartz and manganese garnet crystal deposits that washed down to the beach from the surrounding rocks over the years. The purple swirls are most visible after a storm and can keep you looking at them for hours on end as you explore the beach and the keyhole rock formation located right offshore. 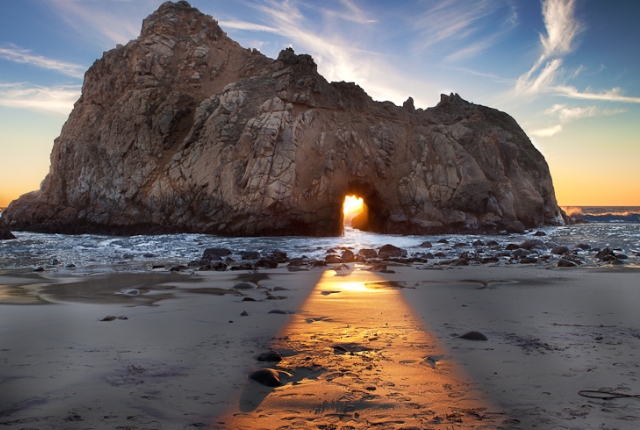 The Shelter Cove Beach in California may not be as appealing as the rest of the beaches on this list owing to its gray colored sand. Nevertheless it is a must visit spot if you are touring California. The deep gray color of the sand which makes it look almost like dry mud, is a result of the deposits from the erosion of the nearby cliffs.

The Rockaway Beach in San Francisco sports dark, chocolate brown colored sand. The sand gets its color from the combination of the volcanic greenstone and the bluish grey limestone found on the beach. Perfect for lounging and exploring, the chocolate sand beach is a must visit for its serene beauty. 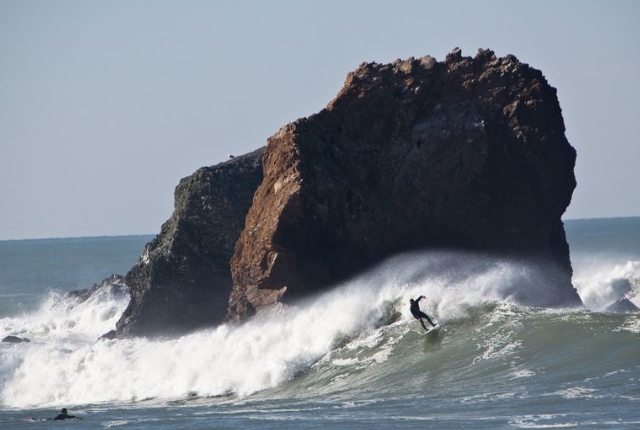 Let’s finish off this list with the beach that boasts of housing every known color on earth. The Rainbow Beach in Australia features sand that comes in over 72 different colors. The myriad colors on the sad come from the erosion of the multi colored sand cliffs located nearby. The sheer brilliance of these colors and the way they seem to dance on the shore can be best viewed at low tide from the southern end of the beach up to the towering colored cliffs. 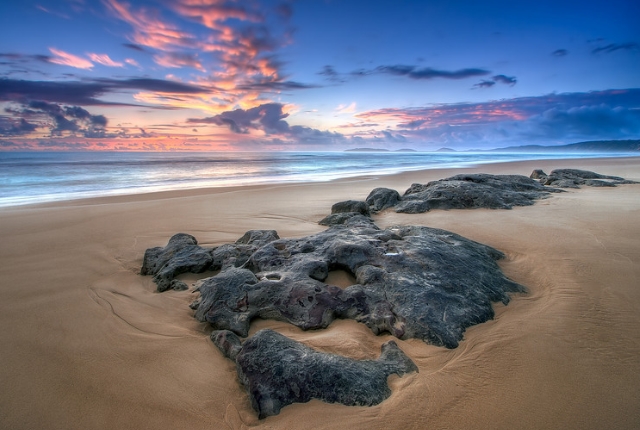