The bustling city of Munich is the largest city of the state of Bavaria. This teeming mega-polis is known for its well dressed citizens and its love for beer. A flood of tourists descend into this gorgeous city every year to take part in the annual Oktoberfest celebrations. This city abounds with palaces, museums and art galleries. The Englischer Garten, Marienplatz and Munich Residenz are some of the top tourist sites of Munich. To discover more about the interesting things you can do in this beautiful city, read on.

Here Are 8 Interesting Things To Do In Munich:

The sprawling Englischer Garten or English Garden, has the unique distinction of being the largest urban garden not just in Munich but in the whole of Europe. The American born English physicist, Benjamin Thompson designed this exquisite garden under the orders of Archduke and Elector, Karl Theodor.

Some of the must see attraction at Englischer Garten include, the beer gardens, Chinesischer Turm ( the 25 meter high pagoda), a beautiful Japanese tea house and a small Greek temple.

This massive 900 acre garden also has several beautiful paths that meander lazily around massive oak and maple trees. These well laid out paths are ideal for cycling and jogging. 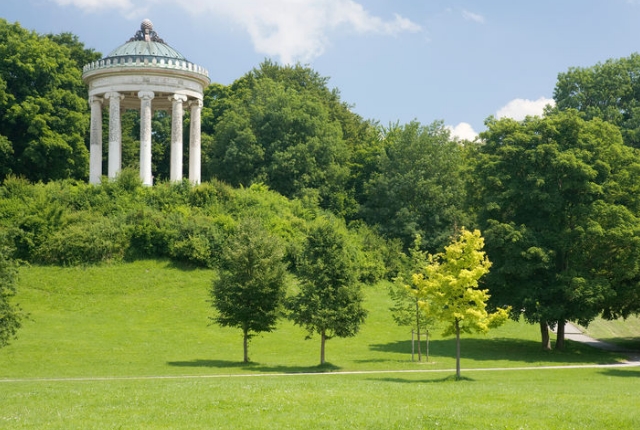 2. Be Awestruck By The Majesty of Munich Residenz

The resplendent Munich Residenz stands proudly at the center of Munich. Over the centuries the rulers of the Wittelsbach dynasty transformed a small 14th century moated castle into the grand castle complex that we see today.

This stunning castle, which is mix of Baroque, Renaissance and Rococo style of architecture, was the former royal palace of numerous Bavarian emperors, princes and dukes.

Visitors to this 130 room castle complex must explore the Hall of Antiquities, the Trier Rooms, the Stone Rooms, the Ornate Chapel and the King’s Tract. Some of rare collections which are displayed at the Munich Residenz include fine miniatures, exquisite porcelains, ecclesiastical vestments and beautiful pieces of silver. 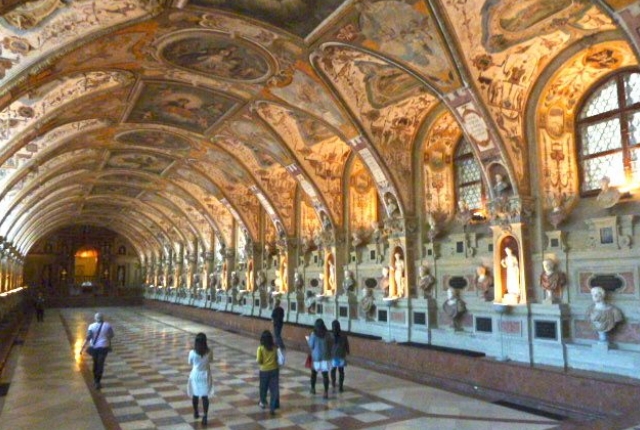 The imposing Nymphenburg Castle is located approximately 5 kms northwest of the Alstadt. This colossal structure was commissioned by the powerful Elector Ferdinand Maria in 1664 – to celebrate the birth of his son.

Later on, the rulers of the Wittelsbach dynasty expanded this grand Baroque style mansion and made it into their official summer residence.

Some of the high points of a visit to the Nymphenburg castle include touring the King’s and Queen’s chambers, inspecting the three dimensional ceiling frescoes, and examining the exquisite collection of fine porcelain. A visit to Nymphenburg Castle is incomplete without touring the beautifully landscaped palace grounds. 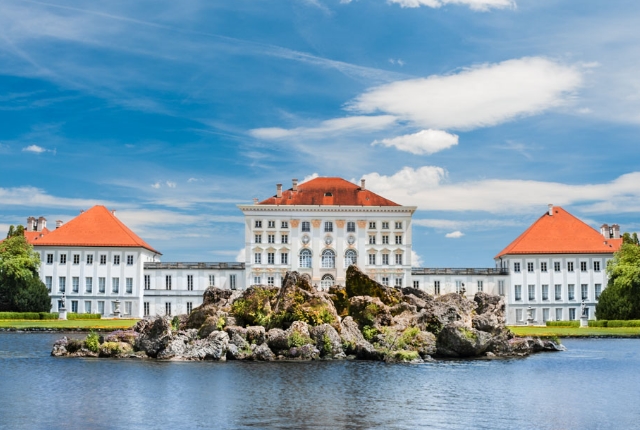 Marienplatz or Mary’s Square is located in the heart of the vibrant city of Munich. Marienplatz which is the very heart and soul of the Alstadt, was founded in 1158 by Henry the Lion.

In the Middle Ages the Marienplatz, which about 100 meters long and approximately 50 meters wide, was used as a marketplace.

In the ancient times this square was a popular site for tournaments and celebrations. Some of the popular tourist attractions around Marienplatz, which is extremely popular among tourists and locals alike, include Mariensaule (a large column), the grand New Town Hall, the Fischbrunnen or the Fish Fountain and the majestic Old Town Hall. 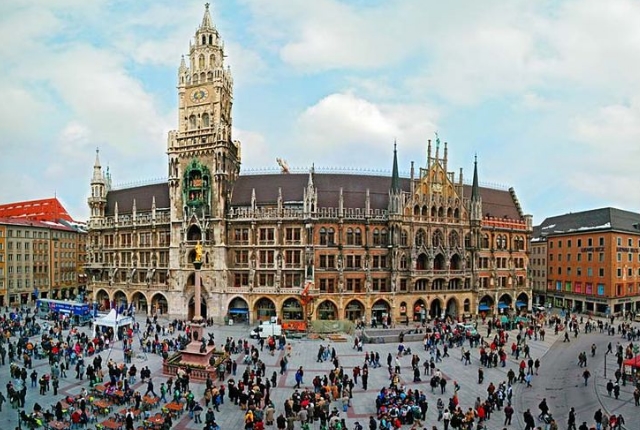 The impressive Baroque and Rococo style Asam Church in Munich was built by the wealthy Asam brothers between 1733 and 1746. One of the most ornate churches in the city of Munich, the Asam church was initially a private place of worship before it was converted into a parish church.

The interiors of this church are as ostentatious as the inside of a glittering treasure chest.

Every conceivable space inside this church is draped with gilt garlands, chubby cherubs, lavish detailing and beautiful statues. Another outstanding feature of this church is the magnificent statue of St. Nepomuk, a Bohemian monk, which stands proudly directly above the main entrance way. 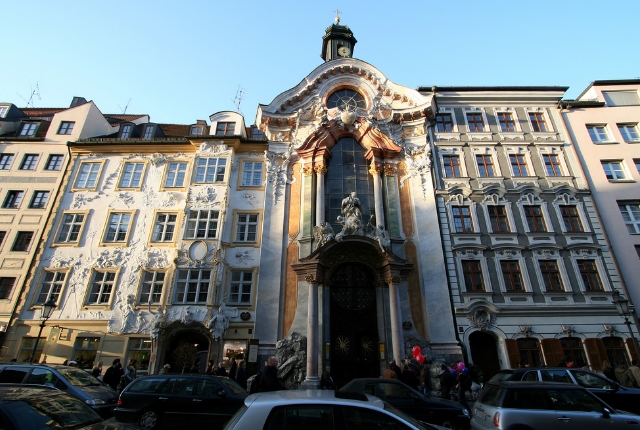 The 50,000 square meters Deutsches Musuem, is the largest technological museum in the world. The Deutsches Musuem which was established in the early part of the 20th century (1903 to be exact) is an outstanding place to carry on a constructive dialogue between science and the society. A visit to this museum affords people the chance to have an in depth insight into the laws of nature and different technological methods. The Deutsches Museum also has several interesting interactive exhibits as well. This museum is visited by a whopping one and a quarter million people every single year. 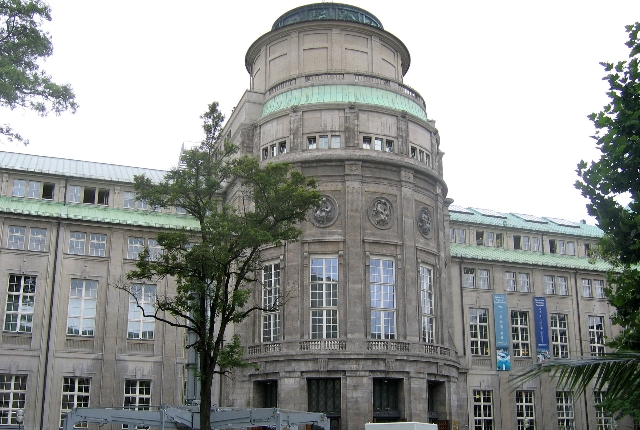 A visit to BMW Museum museum is a must for anyone who is visiting the German city of Munich. This awesome museum which deals with the history of the automobile giant BMW is situated near the Olympiapark. The BMW museum which functions out of an iconic circular shaped building was established in 1973. Inside the museum which has more that 5000 square meter of exhibition space visitors can get to see some of the best cars, motorcycles and engines which has been manufactured by this automobile giant over the years. 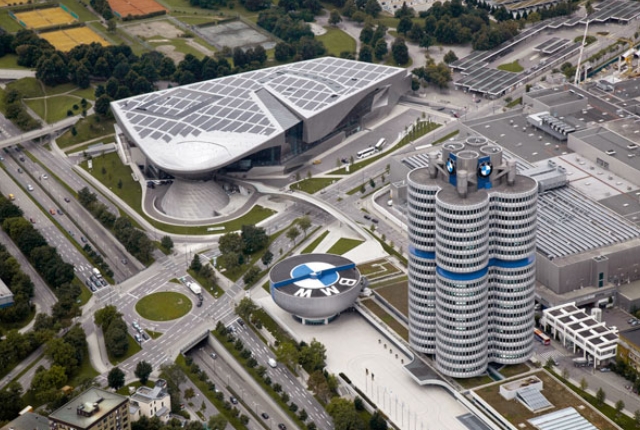 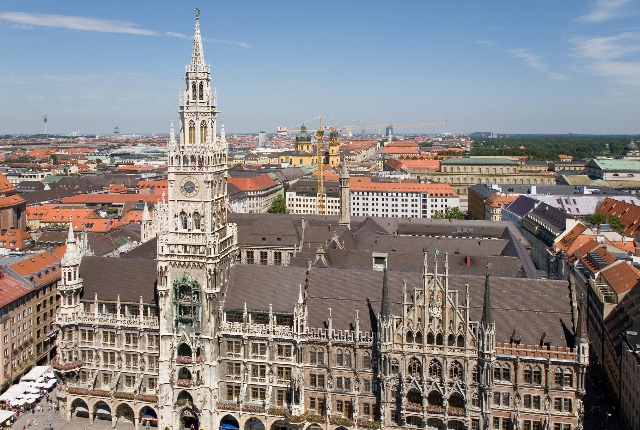