There are people who thinks of Korea as a dangerous place so in this condition thinking of honeymoon here might appear a mad idea. However, what you hear from people who have only heard about it like you is not always true. Ask the same thing to those who have been here and then you will find what real Korea is and the idea of honeymoon here is not mad but very romantic and exotic. Do read about the top 8 honeymoon ideas and see how beautiful honeymoon could be if you had chosen Korea as the destination.

Here Are The 8 Honeymoon Ideas In Korea:

Located in the southern part of Korea, Jeju Island shares a unique landscape with the Korea. Recently it has come up as one of the favorite spot for honeymoon not only among Koreans but the entire world. The island offers a peaceful atmosphere located far from the bustling city of Seoul. Here at Jeju, visitors can find themselves amidst of several natural heritage which includes Lava Tubes, Beautiful beaches, Hallasan Mountain and many more. It is a fact that beaches make one of the favorite spot for visitors or honeymooners and that is present here in its most refined form with clear turquoise water. 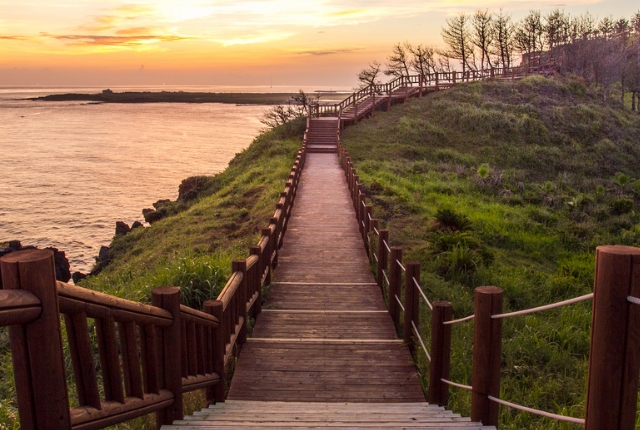 Since the past 1600 years, Korea has preserved its traditional clothing called as Hanbok. Not only a part of the traditional culture of Korea but Hanbok is also a must experience with honeymooners. Although, today, Hanbok is worn only at special occasions such as national holidays or wedding parties, but it gives an experience to feel like a Korean in Korea. Girls may choose from a number of bright colored Hanbok while boys also have this option but not many. These look elegant and makes you more familiar with the Korean culture. 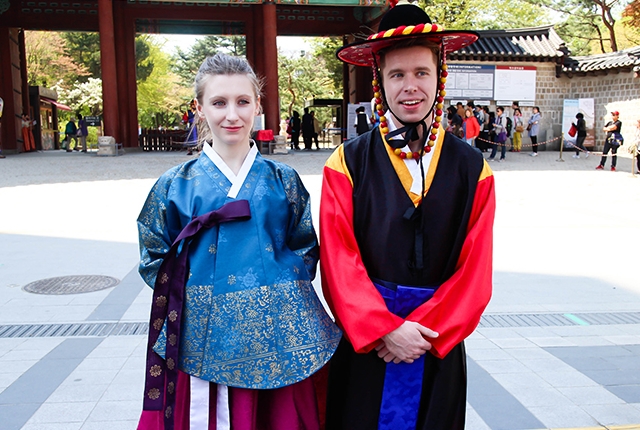 Having another name as “the pond Of God”, the waterfall shares a unique story of seven fairies busy in the duty of the king of the heaven came down from the clouds to bathe in the clear water of Cheonjiyeon. The waterfall is 22 meter high and is guarded by several rare plants. There exists a subtropical path that leads to the waterfall and passes from a bridge under which you will be able to see wide array of Koi (Love) fishes. In the water of Cheonjiyeon, exists the Eels. Visitors as well as honeymooners love to be here at night and wait for the eels to illuminate the pond and turn it into heaven of stars within no time. 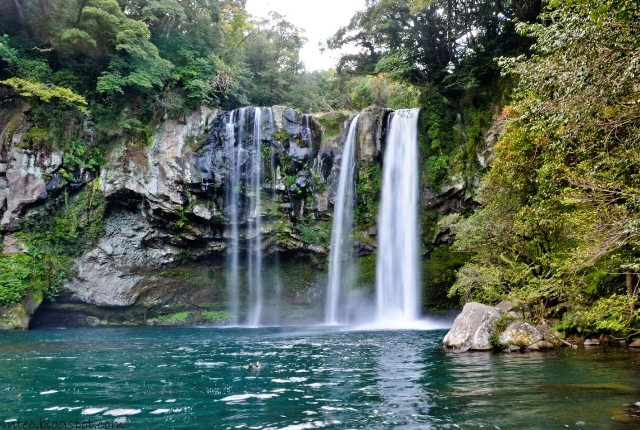 The island is popular for various reasons in which beauty comes first and then other reasons like broadcasting of Korean dramas which were filmed here. Since 2002 after it was first filmed, the crowd to this place increased even more and finally in 2006, the name island gained its cultural independence thus becoming the Naminara Island having its own flag, passport, stamps and currency. The island is a true symbol of nature as you will be welcomed by various small animals like rabbits, squirrels and deer while walking the island and the Forest Of Sweethearts is yet to come that is even more famous for its changing seasons and the splendid view. 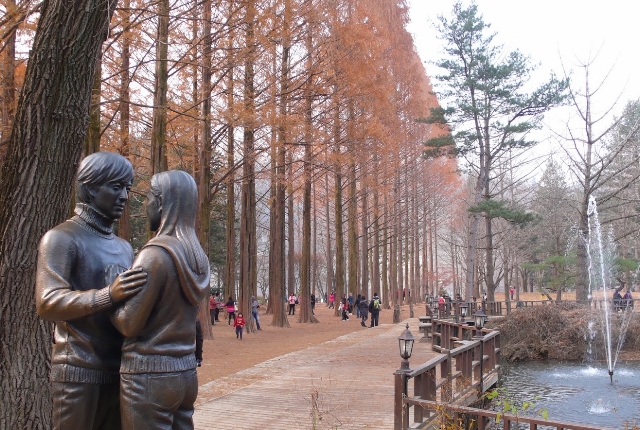 Yangduam is also called the Dragon Head Rock of Korea. It is all because of these strong winds and waves flowing from thousands of years ago that have shaped the rock this way. There exists coastal road as well that is favorite among visitors as from here one can watch the black rocks and the emerald blue water while driving along its picturesque coastal lines. 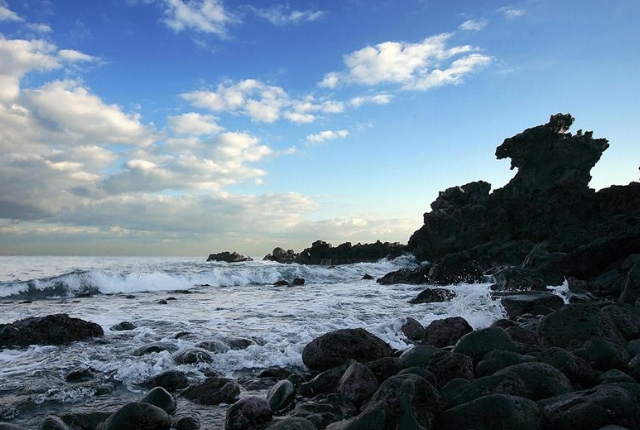 Without knowing anything about this museum, I would love to be here. It actually is an art gallery having paintings made using ‘Trompe I’oeil’ techniques that trick the eye to view the 2D vision as 3D. Not only the visitors can watch the paintings but actually pose with them to make it look like they actually are at the real scene. On the other hand is present the Ice Museum that has impressive sculptures and ice slides. Make sure that you must bring a jacket or a sweater here as it is very cold. 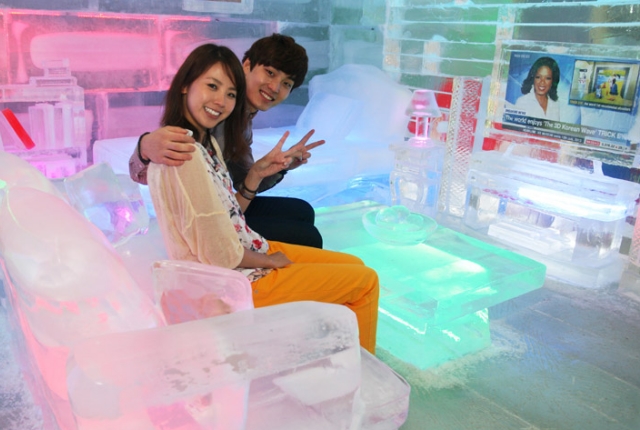 Being able to watch sunrise or sunset with your loved one is one of the most romantic feeling in the world. If you too believe so then here is Seongsan Ilchulbong for you that bears the other name as the Sunrise Peak. Here at this point, you will find a huge crater at the top. Watching the sun rising from the crater with its bright yellow aura especially during springtime is magnificent feeling. For visitors there are available trails where visitors climb and feast their eyes with the beautiful view of the entire island. 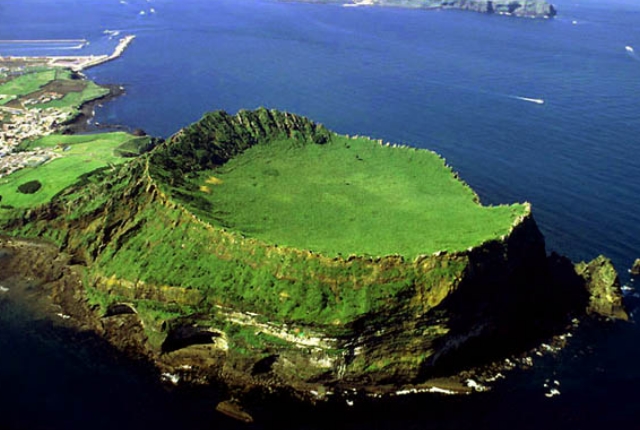 Unique name isn’t it? Sounds like a favorite spot of kids, it is really astonishing to see that it makes one of the favorite thing that most honeymooners like to do. Created in the year 1974, the hello kitty island is actually an exhibition hall where you will find lovely Japanese characters popular among adults and kids both. There exists and art gallery, café and various exhibition where visitors can perform a number of activities. 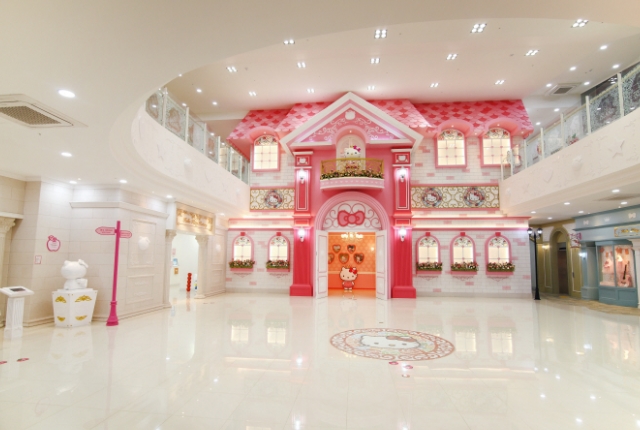