The maritime province of New Brunswick is located in eastern Canada. New Brunswick showcases the best of Canada’s east coast. Fashioned by the mighty Atlantic ocean, this eastern Canadian Province is typically looked down in favor of its more exciting neighbors which include Nova Scotia and Prince Edward Island. With its mostly mild maritime climate, sunny coastal waters, pristine beaches and virgin forests, New Brunswick offers a slew of attractions. Some of the best, most awesome things to do in New Brunswick include exploring the scenic Hopewell Rocks, visiting the St. Martins Sea Caves and discovering the Acadian Historical Village. Read on, to discover some of the truly exceptional things to do in New Brunswick.

Here Are 10 Awesome Things To Do In New Brunswick:

The ever changing, mammoth rock formations of Hopewell Rocks, one of the most famous natural sites in the Canadian province of New Brunswick, compels people to pause and appreciate its ethereal natural beauty.

Hopewell Rocks which also goes by the moniker Flowerpot Rocks is located on the pristine shores of Bay of Fundy, in the southeastern region of New Brunswick.

These unique rock formations are the result of millions of years of tidal activity in the region, which carved out these fantastic forms from massive mountain ranges. 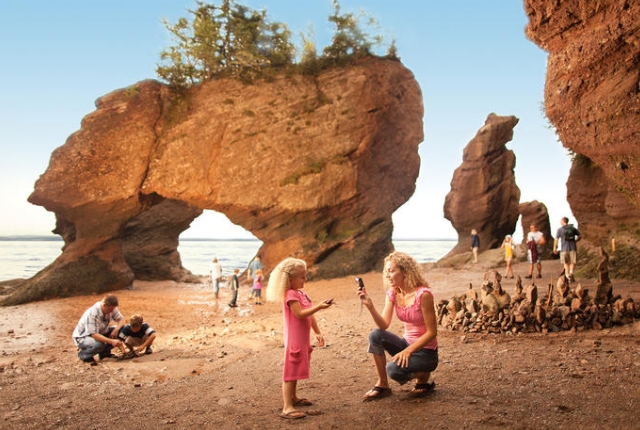 Irving Nature Park, an ecologically diverse region along the Bay of Fundy is best known for its awesome coastal topography and its pristine forest cover. This 600 acre park was created by J.D Irving, Limited in order to protect this environmentally rich area.

The Irving Nature Park is an absolute haven for birdwatchers, as different kinds of endemic and rare birds like the Black Duck, Blue Herons and Capped Chickadees call this area home.

This nature park, which boasts of nearly 8 different walking trails, is the ideal locale to indulge in a spot of serious hiking. Board walking, snowshoeing and swimming are other popular recreational activities this region has to offer. 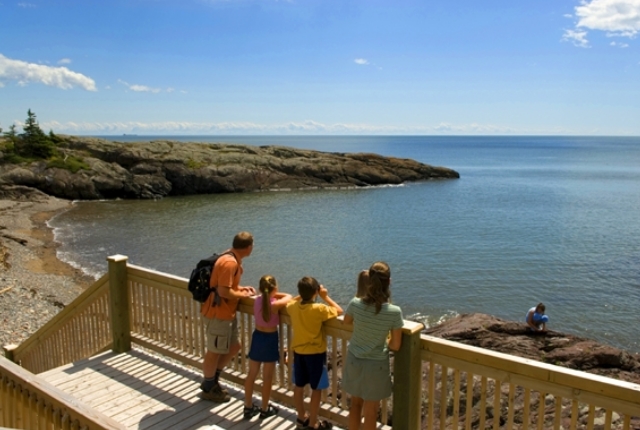 The sandstone sea caves in the village of St. Martins attract thousands of tourists all year round. These awesome caves have been carved into massive 250 million year old rocks as a result of relentless tidal activity. The best time to explore these caves is during low tide – as the caves are partially submerged during high tide.  Visitors can spend several enjoyable hours exploring some of the larger caves of this network. 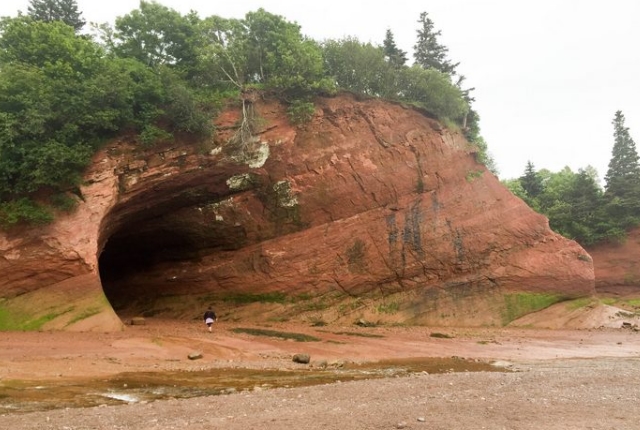 Kingsbrae Gardens in Saint Andrews, New Brunswick, is a 27 acre horticultural paradise. Kingsbrae Garden has earned the unique distinction of being one of the top ten gardens in Canada. The unique location of this garden atop a small hill affords visitors exceptional views of the Passamaquoddy Bay.

The juxtaposition of old and new gardening styles makes the Kingsbrae Gardens all the more appealing.

The beautiful themed gardens in this outdoor masterpiece houses over 50,000 perennials. The numerous winding streams, beautiful ponds and even an ancient Acadian Forest adds to the overall charm of Kingsbrae Gardens. The numerous sculptures, Dutch windmill and Cedar maze are the other noteworthy exhibits of this garden. 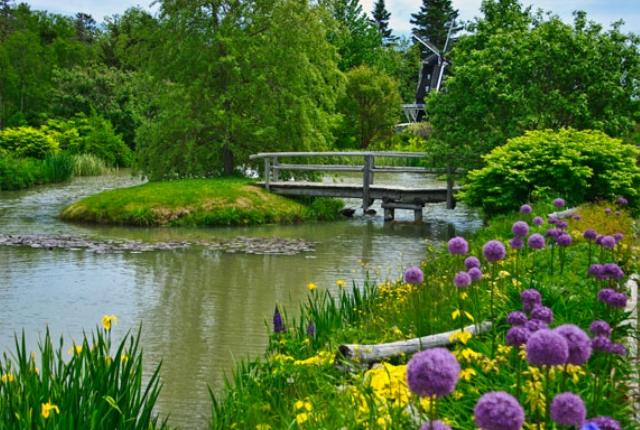 The Roosevelt Campobello International Park which encompasses an area of nearly 11 square kilometers conserves the stunning house and the surrounding landscape of the summer retreat of Franklin J Roosevelt and his extended family.

Today, this beloved island memorial stands as a symbol of co-operation between the US of A and Canada. Besides exploring the Roosevelt family home, visitors to this region can also explore the un-spoilt natural beauty of the surrounding landscape. 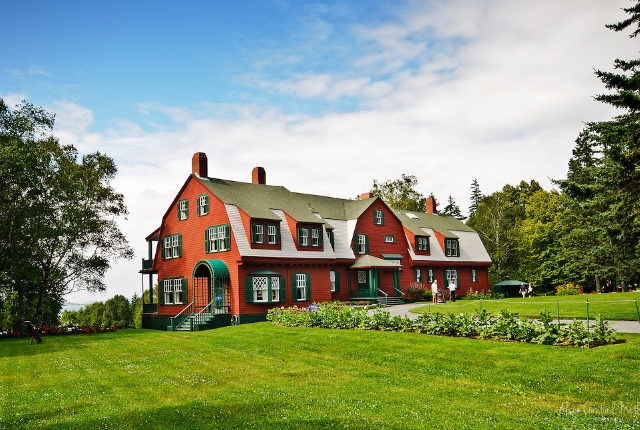 Fredericton Boyce Farmers market is one of the best community markets in Canada. Every Saturday between 6 am and 1pm, 665 George Street in Fredericton becomes a beehive of activity.

The market also has numerous stalls which sells ethnic foodstuff like stuffed grape leaves (a Lebanese specialty), tasty falafel and delicious samosas. Visitors can also shop for quirky jewelry, pottery and sculptures at this market. 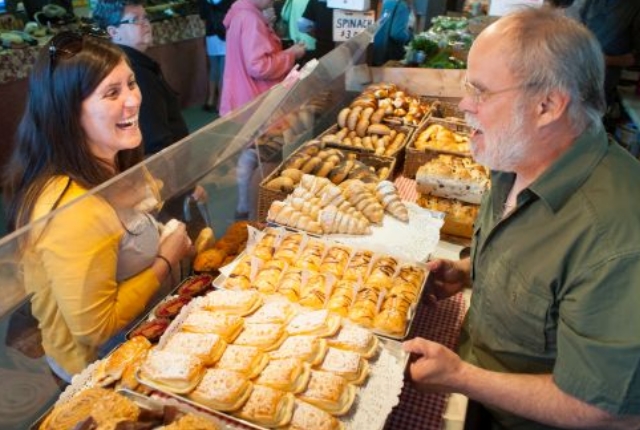 7. Be Mesmerized by Swallowtail Lighthouse on Mannan Island

To reach the lighthouse visitors have to climb down a flight of steep steps before walking across a creaking wooden footbridge.

Once inside the lighthouse visitors can climb the winding stairway to reach the top of the lighthouse, and enjoy spectacular views of Mannan Island and the surrounding bay. A visit to Swallowtail Lighthouse is incomplete without visiting the light keeper’s house. 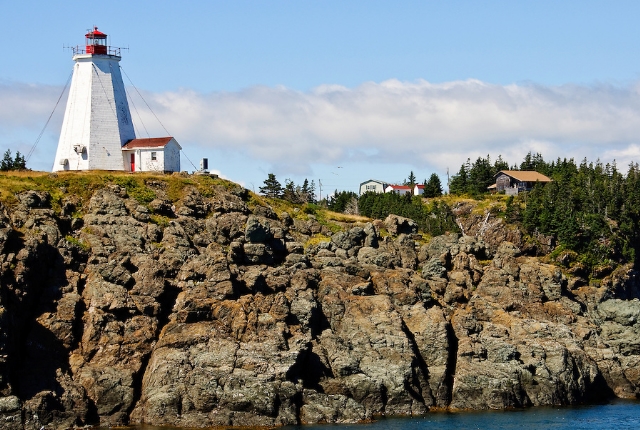 8. Step Back In Time At Acadian Historical Village

The Acadian Historical Village portrays accurately the life of Acadians (French colonists) who lived in New Brunswick between late 18th century and early 20th century. This impressive living history site is located on the banks of Riviere du Nord.

The Acadian Historical Village basically showcases an Acadian rural settlement as it existed in the centuries gone by.

Visitors can explore the general store, the pioneer chapel and the school among other traditional structures at this historic village. The site is open to the general public from June to October. 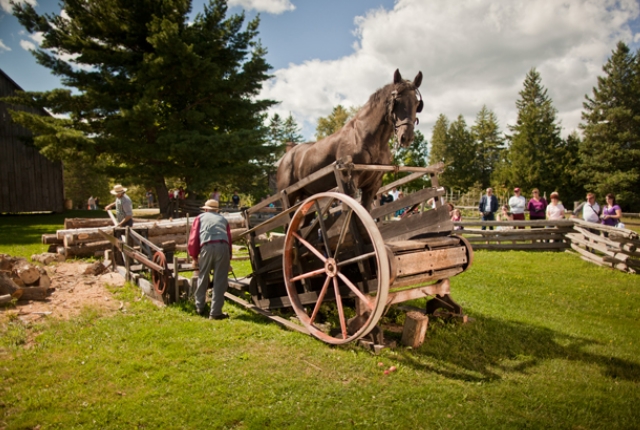 Magnetic Hill Zoo which is located in Moncton, New Brunswick, showcases diverse collection of animals from every corner of the earth. The 40 acre Magnetic Zoo abuts Magnetic Hill and Magic Mountain theme parks.

Today, the Magnetic Hill Zoo which has earned the unique distinction of being the largest zoo in Atlantic Canada houses over 400 animals. Some the top animal exhibits at the zoo include the tigers, leopards, gibbons, lions and zebras. 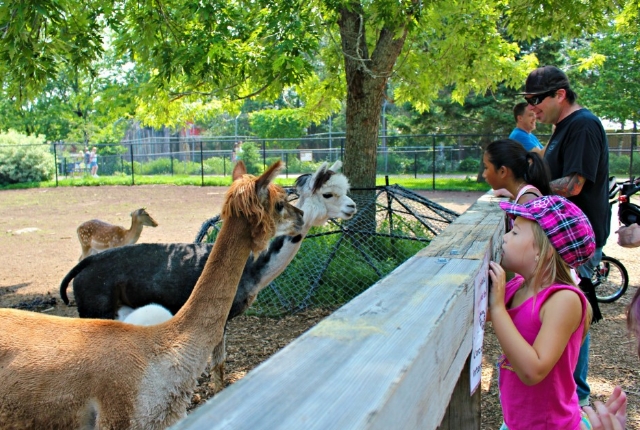 10. Be Awe Struck By Reversing Falls

This phenomenon creates a series of treacherous rapids and dangerous whirlpools.

To truly appreciate the magnitude of this natural occurrence you should watch this phenomenon at least twice on any given day. Visitors can head to the Fallsview Park or the Bridge Road to get a spectacular view of this natural marvel. 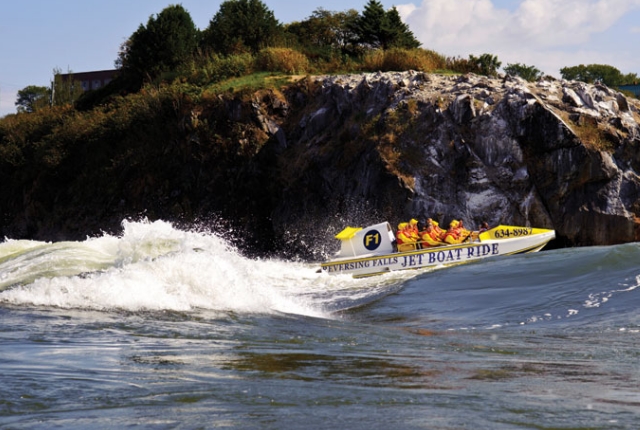